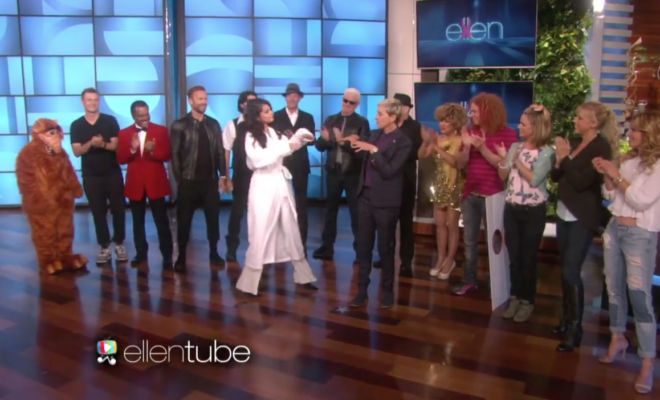 This is what Squads are made of! Ellen Degeneres had a hilarious interview with Selena Gomez in which she asks Gomez why she is not in Taylor Swift’s Squad. For the record, Ellen, you are so in her squad!

Ellen DeGeneres: Why am I not in Taylor’s squad?

Selena: I mean I think you are! I would assume. You got the sparkles down in your little costume tour thing when you were with Taylor.

Selena: You know I think baking is involved and…

Ellen: You have to know how to bake?

Selena:I mean, you don’t have to, it helps. A lot of wine, talking about boys and life.

Ellen: I can talk about boys and especially if I drink wine, I have a lot to say.

Oh Ellen, how we wish we could sit down with you and talk about boys every day!

Check out the interview below and then keep reading to meet Ellen’s new Squad!

Ellen then proceeded to surprise the audience by bringing out her own squad!

“Over the years, I have given many performers their start right here on this stage. Justin Bieber, Lady Antebellum, The Bumble Myer Boys, they didn’t take off the way I hoped, but they were here. And of course I’ve had Taylor Swift here several, several times. Would I say that she owes everything to me? I sure would, yes. Anyway, because we’re such close friends I got to go to Taylor’s concert last month by purchasing tickets on Craigslist, apparently she wasn’t getting my texts. I found something out and perhaps you know this about Taylor, she has a squad. She’s got herself a squad, did you know that? You know what a squad is right? It’s a possy for white people. Kendall Jenner is in the squad, Selena Gomez is in it. Guess who’s not in it, this gal right here. Oh it’s messed up alright, yeah. Don’t get me riled up. I don’t even want to be in Taylor’s dumb squad because I’m announcing today and people didn’t know this, I have my own squad, and it’s even squadier than her squad. I had my squad for a long time, like since the 80’s, before 1989 Tay Tay.”

So who made the cut? Carrot Top, Stephanie, DJ and Kimmy from Full House, Tina FREAKING Turner, Nick Carter from the Backstreet Boys and in a surprising shocking twist, Selena Gomez switched squads to join Ellens!! See who else is in Ellen’s Squad by watching the video below!