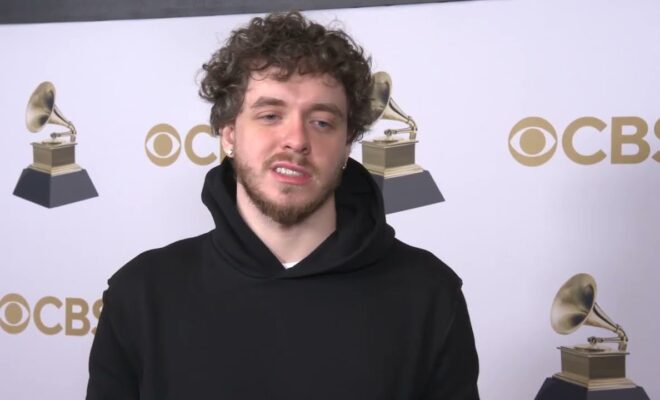 Jack Harlow has finally made it to the Grammys stage.

After being nominated last year for the first time and virtually attending, the 24-year-old rapper is ready to make his official debut. He’s walking into this awards show on April 3 as a 3x nominee. He called being nominated the “ultimate validation.”

“To be nominated at the Grammys is just one of those universal honors that everyone cares about,” he said,

“I watched the Grammys a lot growing up,” Harlow admitted. “I’d like to think almost every year dreamed of being here. I got nominated last year but it was virtual so this feels like my debut.” Last year, Jack Harlow was nomianted for the first time for Best Rap Performance for “What’s Poppin'”.

This year, Harlow is nominated for Album of the Year for being featured on Lil Nas X’s Montero album. Additionally, he is up for Best Melodic Rap Performance for “Industry Baby.”

Jack Harlow didn’t get to the Grammys overnight. It took years of hard work from stage performance to songwriting, production, etc. The biggest piece of advice that he could give to a new artist is to “be very honest with yourself.”

“If you’re an aspiring artist, look in the mirror and figure out what you could be doing better. Don’t get too self-satisfied. Don’t flatter yourself too quickly. Be critical. Figure out how you can have confidence.”

He continued, “I didn’t want to see my progress. I came a long way and I got better at this but it was because I was critical of myself. I think that you have to have a balance. You need to have confidence and have love for yourself but be critical.”

For Jack Harlow personally, he wanted to focus on improving his songwriting to become an all around better artist.

“My writing got better,” he explained. “I had to work on my writing, my tone. I had to grow into myself as a man you know? Just like you grow as a person, you grow as an artist.”