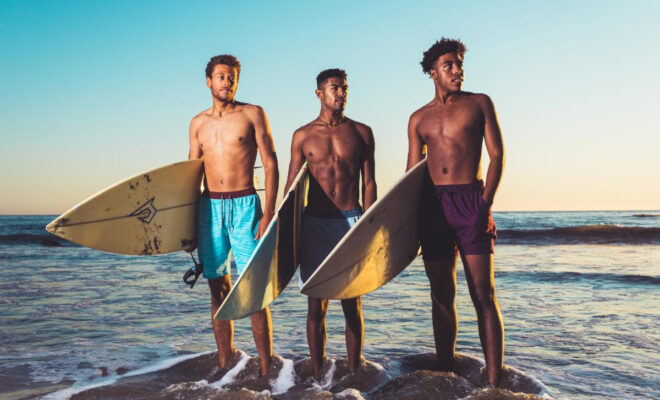 EXCLUSIVE: We The Commas Interview

Stage Right Secrets spoke with California based trio, We The Commas. Read our exclusive Q&A with the brothers, below.

Congrats on “Custom Made,” walk us through the creative process behind the song.

Band: “Custom Made” was inspired by a real conversation at our favorite look out point. One of our homies was showing off his new custom made Stetson wide brim hat. There was something that hit hard about those words “custom made” that immediately inspired the chorus. Out of nowhere Cam started singing “I’m custom made for your love”. The boys all went crazy in the car because it felt like a dope chorus. Cam came home and showed Len, so he wrote his verse and Jordy wrote his verse shortly after about a girl he had been into for a long time.

Do you have a favorite/standout lyric from the song?

Cam: Custom made for your love” resonates heavily with us because we really do believe there is someone custom made for everyone.

What inspired the “Custom Made” music video?

Band: The inspiration for the video came from a conversation with our producer Chris Rosa. We were discussing how we are so fortunate to just be ourselves in an industry that sometimes can be very mathematical about how they brand artists. When working with us, Chris really just wanted to hone in on our individuality and our vibe altogether. He then flipped that idea for the video and decided to show the process of trying to “brand” a band. In the end we had a lot of fun and what we naturally wear ends up being the most comfortable fit for us. Though to be honest we loved rockin each fit in the video!

You described your music as surf alternative R&B, where do those influences come from?

Lenny: “SARB” is a mixture of all of our earliest musical influences. Our parents had us listening to a wide variety of music. Everything from Stevie Wonder, Maxwell, and India.Arie to Pearl Jam, Green Day, Nirvana, and Dave Matthews band was in constant rotation in the house. We grew up on the coast of San Diego and that beachy sound heavily influenced the music we create as well. Shout out Young the Giant and The Last Dinosaurs! We love you guys lol.

Has your music taste evolved over the years?

Jordy: Our taste has just grown to include new artists that we learn about. We also go through seasons of listening heavily to a certain genre.

How did your band name come about?

Band: Comma is our last name, and the “We” in We the Commas represents unity between us as brothers and that we are hoping for unity in the world – we the people.

Since most of the world is or was in quarantine, what did you do to pass the time?

Did you find it easier or harder to be creative while at home?

Jordy: We find it easier because we can hyper focus.

Lenny: We’re about to go on our first tour so we are very excited about that! Our first show will be at The Living Room, and then we will have a show at The Backyard, then another show at The Kitchen. Yeah, I believe we have a show scheduled at The Garage too, I guess that depends on the WiFi. But everyone is invited!!!