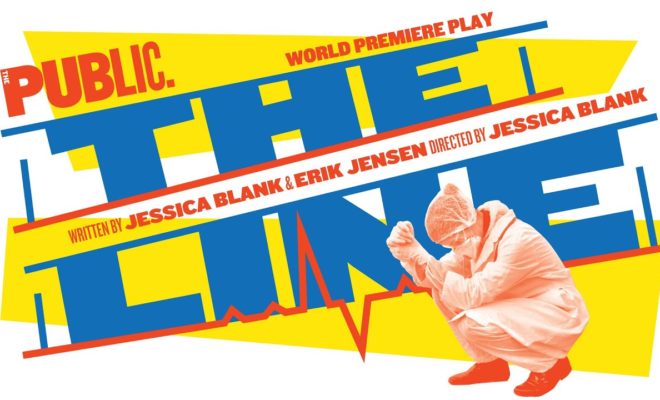 Our Exclusive Chat with The Line’s Jessica Blank & Erik Jensen

The Line is a powerful new documentary-style play by Jessica Blank and Erik Jensen based on anonymous firsthand interviews with medical first responders in New York City during the COVID-19 pandemic. The cast features Tony Award winner Santino Fontana, Arjun Gupta, John Ortiz, Alison Pill, Nicholas Pinnock, Jamey Sheridan, and Lorraine Toussaint. We got to talk to writer-director Jessica Blank and writer Erik Jensen on this incredibly timely and important piece of work.

You two are not only writers, actors, and directors but also MARRIED! Does that make working together harder or easier?
Jessica and Erik: We’re also parents to a very imaginative 10-year-old!  We started working together when we started dating 20 years ago. Collaborating has always been a part of the package. We have very different skillsets when it comes to making work, so the division of labor is usually quite even. Jessica is a structure nerd, Erik’s process is very loose and improv-y. So there’s always an artistic dance going on. A dialogue. We trade-off being the creative engine depending on the project. We tend to think of ourselves in our various roles as "jazz musicians” reporting for duty: sometimes you lead and sometimes you follow. Our goal is always to take our egos out of the mix, remove unhelpful words like “good” and “bad” from the conversation and hone in on what’s effective. This practical approach has been helpful in our marriage as well as in our artmaking. And during the creation of THE LINE, we had the incomparable Jesse Alick as dramaturg and tiebreaker if we ever found ourselves in a deadlock.

How was it writing and directing for the digital sphere?
We are always looking to push the form forward; it would be too easy to write “The Exonerated” over and over, and so with each new documentary play we create, we are interested in what formal innovation the material suggests. In "Aftermath," which is written mostly in English but partly in Arabic, we are led through the play by a translator bridging the gap between cultures/language. In “Coal Country” Steve Earle’s music held the play together and moved it forward, serving as a sort of Greek chorus. In this case, the digital sphere gave us an opportunity to put the audience directly in the seat of the interviewer without imposing our opinion. This, in some ways, makes it our most intimate piece to date– we actually conducted these interviews over Zoom and Facetime, so the audience, if we’ve done our jobs right, is reliving that first moment we heard these heartrending stories from the real frontline healthcare workers. This came as a surprise to both of us.

Casting actors with a foot in both the theater and film worlds was important too.  Preserving subtle intimacy while speaking direct to camera without losing theatricality is a helluva trick to pull off and we feel our actors just nailed it in real-time.

Technically, it was an adventure because we were asking our actors to help with technology, camera angles, costumes, lighting.  Our technical director Ido Levran basically built a remote multicamera TV studio that reached out from LA to New York to London and back again. Everyone was sent cables to link directly with the internet, adapters, etc. Actors were responsible for turning microphones on and off.  The fact it was broadcast live over something as potentially glitchy as the internet was decidedly not exciting. It was terrifying. But our brilliant TD Ido, our wonderful PSM Janelle Caso, and our production team at The Public Theater rigged a series of failsafe systems to save us from everything short of a blackout.

What was the anonymous interviewing process like?
Now is a time for truth. As this pandemic rages on throughout the country it is important that we have access to the information to keep us safe and to understand what's actually happening. Usually, these stories are expressed in numbers: “23,000” New Yorkers dead, 140,000 nationally. A lot of people were afraid to talk to us for fear of repercussions. But the emotional information that our interviewees provided was too real and too important for them to remain silent. In that sense, it was a privilege to be a conduit for the interviews.  Individual voice should never be drowned out by something as cold as numbers or a self-protective bureaucracy. We are in a perilous time as a country and the only real solution to our myriad problems is to speak out loudly and clearly, together.

Did you each have a favorite story or one you immediately felt had to be heard? (I found the nurse who had to tape the oxygen mask to the patient’s face to be one of the standouts for me.)
That’s like asking a parent who their favorite kid is! Our favorite thing was front lining these stories as a whole. It’s our love letter to selflessness, and bravery, and sacrifice and all the boroughs of New York City. It also lives as a warning to the rest of the country going through now what we went through in March. No one at the White House is saying “We are all in this together.” But these health care workers all drove that point home to us over and over. We could get through this so much more quickly, with so much less death, injustice, and suffering, if our leaders banded together to remind us of the fact that we are in this together, and that getting through a pandemic is a collective task that requires us to look out for our fellow citizens. Sadly, we have no executive leadership on a federal level. They’re lying and obfuscating so they can get reelected rather than dealing with the problem. It’s our job as citizens to make them deal with it. As Ed says in the play: “The federal government has American blood on its hands.” And it does. It just took one person in the trenches to say that. We saw it as our duty to amplify his voice.

What do you hope the audience takes away from The Line?
We are all in this together. Wear a mask. Pull together for the greater good or die. It’s about more than you. We did this on 9/11, we did this during the Great Depression, we did it during World War Two. Provenance calls upon us to do it again even if our leaders won’t.

So many comments on the performance are people saying, “thank you” and that they wish this could be shown to everyone they know. Was there ever a fear of being too honest or even a fear as we see the nation rather divided that some people might not even believe your work?
At the moment–pardon our French–people are being fed bullshit and told it’s chocolate pudding. All we can do is truthfully and straightforwardly present what was said to us by the people who live this every day. If someone feels nothing after watching these testimonies–at that point, all we can do is pray for them. And no, we are not afraid of the truth. It makes us sad that so many people are. The veil of ignorance does seem to be slipping for some in this country, which is a good thing. We are deeply distressed that it’s taken this much death and illness and conflict for that to happen.

You have worked with The Public before. What made you come back from more?
The Public exemplifies the notion that theater is for everyone. We are interested in helping that goal become more and more a reality. We first worked as a duo at The Public on our Lester Bangs play “How to Be a Rock Critic”.  From the get go, the institution and the staff made us feel brave, safe, and held. That same thing happened on "Coal Country" and "The Line." “What can we do to help with your work?” is the first thing Oskar Eustis ever said to Erik when he was acting in Tracey Scott Wilson's play at the Public, several years ago. And then he helped. And he meant it. It’s really nice to have a leader who keeps their promises and challenges you to be better at the same time.

What do you think the future of theatre will look like? Are you open to doing more digital work?
Erik is a big fan of doing live digital broadcasts of plays like the National Theater does in London or the Met does with their operas.  Before the pandemic, "Coal Country" was on the way to being sold out for the entirety of its run.  In the case of "The Line"’s single live performance we had several thousand people “in” the theater from all 50 states and 20 countries around the world. Planting seven cameras around the theater is a pretty exciting notion once you realize how many people might be interested. There's no substitute for live theater–everyone in the same room, in the same moment–and we believe deeply that it will come back once we can all gather again. We are totally dedicated to the irreplaceable magic of live theater. But hopefully, the innovations we are being forced to experiment within this moment will open up additional avenues to democratize theater and make it more accessible in the digital sphere–ones we can bring into the future. Live audiences–AND digital audiences, around the world, being able to share in the same performance. It doesn’t get much more public than that.

What is next for you guys?
We're working on the feature film adaptation of our play "How To Be a Rock Critic" about Lester Bangs, developing two new TV series, potentially embarking on a new digital play, jumping back into acting on “For Life” on ABC this fall. Staying safe and healthy. And fighting fascist governmental tendencies with words words words. The country has been sucker-punched. We’re punching back.

Watch The Line below and consider supporting The Public’s health care partners:
https://www.youtube.com/watch?v=jViLNmDbg1g