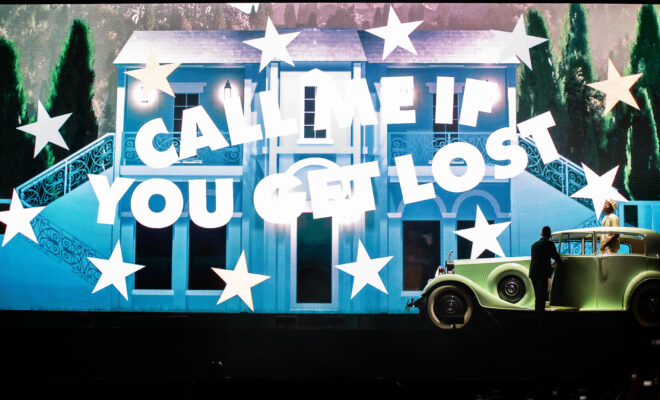 Tyler, The Creator’s Call Me If You Get Lost Tour hits Sacramento

On April 2nd, Tyler, The Creator and friends hit the Golden 1 Center in Sacramento. Opening the show was Teezo Touchdown, Vince Staples, and Kali Uchis. Teezo Touchdown opened the show up full of energy and the crowd was really interested in his set. He was able to keep the crowd engaged and at one point even had someone throwing merch into the crowd. Next up was Vince Staples, he performed his set on the opposite stage as Teezo and Kali, and the crowd had to turn around to watch his set. He had a high energy set full of hit songs and at the end of his set when he walked through the stage toward back stage he stopped to high five and take photos with some fans. It was great to see him walk off stage and immediately give attention to his fans. The next act was Kali Uchis, she had a great production with dancers and her performance was incredible to witness. The crowd went crazy during her set and she had a great mix of English and Spanish songs that everyone sang along too. Her dancers were also incredible and the visuals on stage kept the crowds attention. Lastly was Tyler, The Creator. He had two stages set up, he opened up on the main stage and she showed up in a car and the backdrop was a house that he could actually walk through. He performed in front of the house and upstairs as well. Halfway through his set he moved onto the B stage and he got there by riding his boat through the middle of the crowd on the way to the B stage. The B stage was set up with plants and it almost seemed like he was taking his boat through a lagoon. Overall his set was full of energy and the crowd was matching his energy the entire night. He performed an array of songs including, “Sir Baudelaire,” “Come on, Let’s Go,” “911,” “Yonkers,” and “Earfquake.”