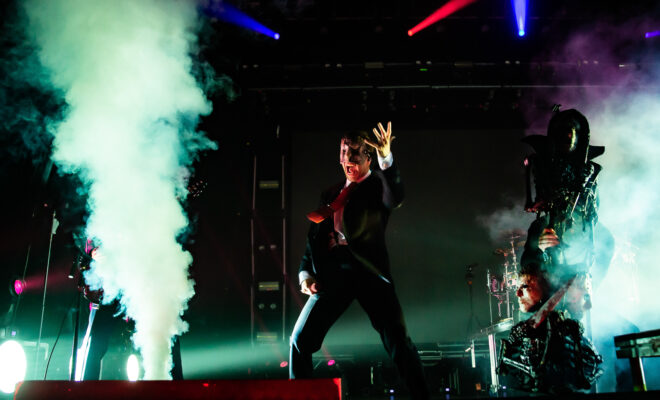 On March 19th the Trinity of Terror tour hit the San Jose Civic. The lineup included Lilith Czar, Motionless in White, Black Veil Brides, and Ice Nine Kills. This show was jam packed with energy and die hard fans that were beyond excited to see their favorite bands under one roof. Opening up the show was Lilith Czar, Formally known as Juliet Simms. She has recently rebranded and this was a great tour to showcase her new music and persona. The fans were very interested to hear her new music and overall she had a great set. Next up was Motionless in White who had the crowd going crazy their entire set. They played a new song, “Cyberhex” along with some classic songs like “Voices,” “Another Life,” and “Devil’s Night.” The following act was Black Veil Brides and they had a high energy crowd screaming along to their entire set. They were able to really feed off the energy of their crowd and make their set so much more energetic and exciting. It was surprising to see them perform some really old songs like “Knives and Pens” and “In The End” but they also played songs like “Scarlet Cross,” “I am Bulletproof,” and ” Faithless.” Lastly was Ice Nine Kills who provided a very theatrical and entertaining set. Ice Nine Kill’s set was very reminiscent of an Alice Cooper show in the sense that they had things going on during the set to add some energy and excitement during a live show. They have a lot of music inspired by classic halloween/horror movies and you can see all the inspiration during the set. Overall this was a great show full of entertaining moments with artists that not only can really provide high energy and excitement but a crowd that was able to give back the same if not more energy and a feeling of happiness from start to finish.