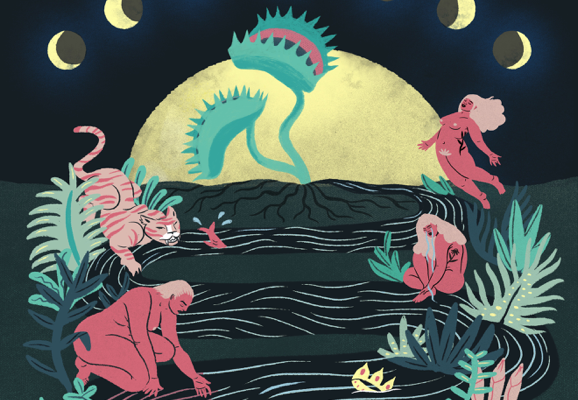 Georgia Nott (one half of BROODS), has released “The Venus Project: Vol. 1,” the full-length album from her all female collaboration, ‘The Venus Project.’ Coinciding with International Women’s Day. Everything from the album artwork to writing to production was entirely made by women. The ten track album features even some of the original raw demos of the tracks to make the album that much more raw and real.
For Georgia, ‘The Venus Project’ allowed her to express a side of herself as a writer and artist that she hadn’t yet had the opportunity to. She explains, “This project allowed me to speak from an extremely honest place and create another type of music that I’ve wanted to make for a long time. The songs themselves are very different to what I’ve created in the past, very raw and low-fi. A couple of songs have even stayed in their original demo form because they felt the most honest that way. The themes expressed in this album are very close to my heart. Some of my most doubtful, insecure and frustrated moments have been documented in this album. Being so vulnerable has been both scary at times, but also liberating. My hope for this album is to speak to the parts of ourselves we don’t always understand, the parts we feel the need to suppress and ignore, the questions we find too hard to ask ourselves. Although I feel this music represents my truth as a woman, the album is for all people. One day I hope the world is not surprised by the extreme talent and genius of creative women, but rather, they value and celebrate women. The expression of women is something the world needs! We can’t evolve without it.”
Born out of her realization that oftentimes, she was the only woman in the room when in the studio or on the road touring with BROODS, Georgia decided she wanted to collaborate with as many women as possible. That collaboration would result in “The Venus Project: Vol. 1,” brought to life entirely by a team of women, from the artwork to the album’s production and management. The group of collaborators includes: Camila Mora, who tours with BROODS as their keyboard player, but is also a highly skilled producer, visual artist and illustrator Ashley Lukashevsky, photographer Catie Laffoon, project manager Sherry Elbe, mix engineer Adrianne ‘AG’ Gonzalez, mastering engineer Emily Lazar; and producer Ceci Gomez, who worked with Georgia on the first single, ‘Won’t Hurt.’ Earlier this week, Georgia shared the music video for “Won’t Hurt” and expanded her team of female collaborators to include: Morgan Gruer (Director, Editor & Animator), Lizzy Walker (First AD), Kayla Hoff (DP), Nico Bovat (Editor), Caraolina Rodriguez (1stAC), Valentina Martinico (Gaffer), Sky Kim (Key Grip), Alexa Cha (G&E Swing), Brittany Spyksma (Hair & Make Up), Paige Klone (Production Designer), Alyzeh Ashraff (PA), Courtney Kane (Choreographer), and featuring Georgia Nott, Sasha Milstein (Young Girl), and Lilu del Rosso (Woman).
Related Itemsvenus project
Jacklyn