The Summer Set is back and better than ever! Fresh off a new album release, pop rock band, The Summer Set is hitting the road to play shows again! They just released their newest album, Stories for Monday, after almost two years from dropping Legendary. The band has been MIA for a while, and now that they’re back, they are giving it 110%. The band has stated in interviews that one of the reasons this album took so long to write was because they weren’t sure that they wanted to remain a band. And boy are we glad that they did push through and write another record because the show was simply amazing and I missed seeing them live! 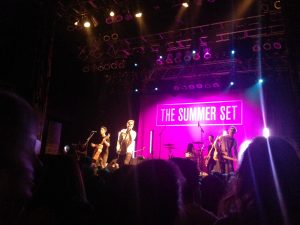 Last time I got to see The Summer Set live was back in 2014 on the Vans Warped Tour. I have never actually seen them play a headlining show, but every time they opened they had a ton of energy and knew how to get the crowd moving. After hearing the new album, I was even more excited that they were touring in support of it. The album encompasses everything that The Summer Set is: from the catchy tunes, to the celebrity references, to the choruses that just get stuck in your head all day!

Handsome Ghost, Royal Teeth, Call Me Karizma, opened the show for The Summer Set and they each were great. My personal favorite was Handsome Ghost, they had a very laid back feel and the music fits the scene perfectly. They capture what is popular in music right now, combining synth vibes with a rock sound and very smooth vocals. They also did an acoustic rendition of “Roses” by the Chainsmokers and it was beautiful! The Summer Set was up next and the fans’ anticipation was so high it became this palpable energy.

The Anaheim date was the first date on the tour and you can tell from their excitement to be performing live again that this is where they belong. Just from the first few songs, they had everyone dancing and singing along. The band kept reiterating over and over again that they were very fortunate to have been able to do this for the past 9 years and the smiles on each members face showed that they genuinely wanted to be there. They opened their set with their new single “Figure Me Out” and Brian Dales was beautiful on the piano. It was a great song to open the set up and showed that they were back with a new twist and defined sound. They then moved to popular songs from their older releases with “Jukebox,” “Boomerang,” and “The Boys You Do (Get Back at You).” They mixed in a lot of new songs and I was surprised to see that all the fans already knew the lyrics and everyone was singing along. They performed “Jean Jacket,” “Missin’ You,” “All In”, “All My Friends,” and “The Night is Young.” This was the first time the band played most of these tracks live and they wove them into the set perfectly with a slow intro for each song before moving into performing it with the full band.

Brian Dales, lead singer, was ecstatic to be performing again and he could not stop smiling the whole time. He was dancing around on the stage and he had so much energy throughout the whole set. John, Josh, Stephen, and Jess also performed each song with great energy and their smiles were contagious. They continually mentioned how happy they were that they did push through for this new record and decided to stay together. They said that they were going to play each song like it was their last time playing a show, but assured everyone over and over again that that was not the case.  The band even threw in some oldies with “Chelsea,” “Someone Like You,”  and “When We Were Young”  which satisfied fans that have stuck with them from the very beginning. They slowed it down for “Legendary” and closed out the set with “Lightning in a Bottle.”

I’m so happy that The Summer Set is back now and they are ecstatic to be onstage again. Their smiles and energy is contagious and you can tell that they are super happy to have stuck out the lows and pushed through to write and record this new record. The Stories for Monday tour just started and it is looking to be a can’t miss so get your tickets when they come through to a city near you! The set won’t disappoint, both new and old fans alike, and be ready to dance and sing the whole time!