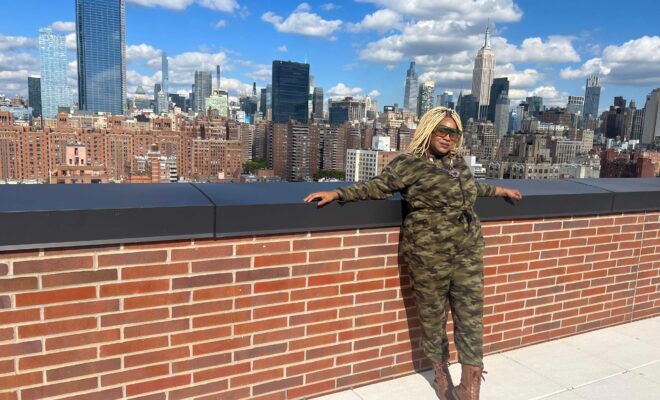 Over the last few years, Multimedia Veteran Tammy Reese has landed some of the biggest celebrity interviews. She’s also covered some of the biggest industry events, along with covering some of the biggest new releases/breakthrough tv series, and became a familiar name amongst top-tier public relations agencies in the entertainment industry. However, the Owner of Visionary Minds Public Relations and Media is not a stranger to the entertainment and media industry. She’s been in the game for over 20 years. We got to catch up with Tammy to get an in-depth look at how her career got started to take her to where she is now and will take her in the future.

Hi Tammy, Congratulations on your outstanding achievements throughout your career. We’ve caught wind of you in 2022 and are very impressed. Let’s begin! How did your career get started?

Tammy: I began my career as a theater actress, tv director, and tv host with The Media Unit’s TV and Stage Production Company. I was in the company for 8 years. During that time, I performed in 60 live stage shows a year, as well as directed and co-hosted our weekly tv show called “Rough Times Live” which The Media Unit produced out of a Syracuse, NY public access cable station.

Acting is my first love, but I also have a passion for journalism. So I eventually enrolled in Empire State College to obtain my degree in media. After graduation, I took some time off to become a mother and start a family. Fast-forward to some years later, and with the support of my family reminding me that I can have a family AND do what I love, I jumped back on the scene to do projects that were meaningful to me. Such as theater, which I did with The RedHouse Theater, and writing and directing short videos on social issue topics such as suicide prevention, domestic violence, HIV/AIDS awareness, and more.

Around 2017, I had a heart-to-heart with myself. I affirmed even though I have all this experience in acting, writing, and directing, I also have a whole degree in media. I began to apply to industry events as a member of the press community and the Syracuse International Film Festival and the NYC Horror Film Festival gave me my big break in the media industry. My first celebrity interviews ever were with Giancarlo Esposito, Siobhan Fallon Hogan, and Tony Todd. As they say, the rest is history.

Do you miss acting or do you think you’re planted in the sand with being the highly sought celebrity interviewer that you are now?

Tammy: What a great question! I like to say, once an actor, always an actor. I have put my acting hat down for quite some time, but I am a trained actress who never stopped studying the craft. I know anytime I put that hat on it will be so smooth sailing because acting is my heart. To answer your question, yes I miss it a great deal. I believe when the timing is right and the universe allows it, the right opportunity will present itself for me to both act and direct again.

I am deeply honored to have this title of celebrity interviewer. I interview people who are not celebrities as well. I treat and interview everyone with respect and professionalism because so many people deserve to be celebrated and have their stories told even if they are not famous.

Being a celebrity interviewer has afforded me opportunities I’ve always wanted, manifested, and that many people may feel are unreachable. I love everything I do and have done in entertainment and media thus far. I don’t take being a celebrity interviewer for granted. It’s been an achievement I’ve worked hard for. I appreciate every celebrity that has shared their time, and stories with this black girl from the south side of Syracuse.

What have been some of your favorite celebrity interviews?

Tammy: This probably is the hardest question to answer. lol. I will do my best. I always learn a lot and get inspired after every interview. Some are very serious, some are very empowering, some are extremely fun, some are just silly, and some I wish could have gone on even longer. But some celeb interviews that have been very meaningful, impactful, and dear to my soul were with Sigourney Weaver, Laurence Fishburne, Sheryl Lee Ralph, Nelly, Meagan Good, Leon, Donell Jones, Slim and Mike of 112, Courtney Kemp, and Mona-Scott Young. I have to give an honorable mention to so many of the cast from The Walking Dead. Not many independent media pros can say they have interviewed cast members from their favorite tv series ever. I was the professional that I am, but anyone who knows me knows that I am the biggest Walking Dead fan ever!

We saw that you also interviewed many stars of 50 Cent’s Power Universe series. How cool is that? Wow! What can you tell us about it?

Tammy: I am loving this interview! It means a lot that you’ve followed my career, especially this past year which has so many of my biggest accomplishments. I’ve interviewed the cast from many of 50 Cent’s tv series on Starz such as cast members of BMF, Power, PowerBook II: Ghost, PowerBook III: Raising Kanan, and PowerBook IV: Force. Having that on my resume is monumental. I got to meet 50 Cent in November of 2022 when I covered his WEtv new series Hip Hop Homicides premiere event. I got to personally thank him for creating these iconic shows and told him that I had interviewed so many of the cast.

What is your greatest joy when it comes to being in the media industry?

Tammy: As an independent multimedia professional, my greatest joy is that I have the liberty to interview who I want and cover what I want without the pressure of a mainstream platform telling me what I should do. I keep hearing all the time how blessed I am to have my body of work without being tied to a mainstream platform. The interviews I’ve landed are rarely obtained by black independent media professionals. I am forever honored and thankful for this journey. Also, I enjoy the way media is universal. I have experience writing for blogs, newspapers, and magazines as well as hosting podcasts. I can cover a film/tv premiere, a red carpet, and do a press junket from home. I am truly a multimedia professional and I am forever screaming #presslife. This lane is so me.

What else can we expect from your ever-evolving career?

Tammy: As stated earlier, I miss acting and directing. I feel in my soul that those wings will fly again in due time. I will continue to help small business owners and up-and-coming talents build their media portfolios and build their brands as the owner of Visionary Minds Public Relations and Media. My media career will continue to grow as I am now in rooms that took many many years to enter. I am also constantly being presented with new industry media opportunities by the day, week, month, and year. So expect me to keep leveling up in media while bringing others with me. Stay tuned for acting and directing projects in the future when my spirit moves me to and reintroduces me to put those hats back on.

Thanks for sitting down with us today. We are confident that everything you do will continue to be great! We are looking forward to all that is to come.

Tammy: Thank you for celebrating my career with me. This interview was truly special and I will remember this experience in a very special way.

Keep up to date with Award-Winning Actress/Writer, and Celebrity Interviewer Tammy Reese on: