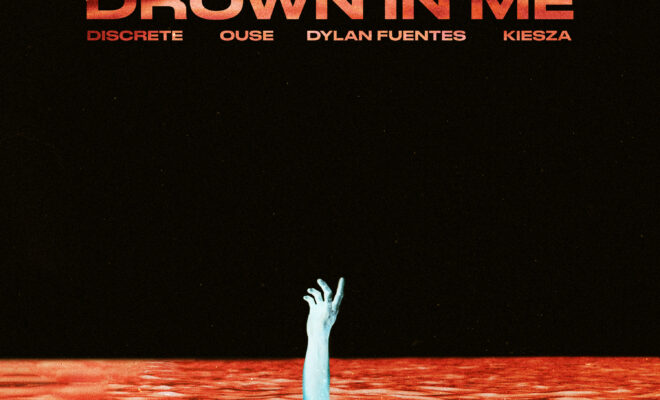 The Story Behind ‘Drown In Me’ By Discrete, Kiesza, Dylan Fuentes, and Ouse

Discrete is BACK with an epic collaboration with Kiesza, Dylan Fuentes, and Ouse, “Drown In Me”.

In an exclusive interview, Discrete revealed the inspiration and story behind the track.

Stage Right Secrets | The initial idea for “Drown In Me” was written back in 2019 and finished during this past crazy year. What was the original version like? What made you revisit it this past year?

Discrete | The record has always lived in the same world as it is in today and to be fair it was never a song I left behind. More in a constant developing process and tweaking small stuff up until waiting for each artist we felt the song needed jumped on.

How did you go about crafting it into what it is today?

Even from the very first day from when we started writing & producing the song it’s had this darkness to it which I’ve really connected with. This feeling was something that was crucial to not change about the track and I’ve been very cautious on changing and adding layers into the record mainly to not lose the essential feeling in the record! It happened multiple times that the changes I made after a full day of work had to be removed and I had go back to the very first core idea and start over.

How did Kiesza, Ouse, and Dylan join in on the track?

It all started out with me, Tudor Davies and Adolfo Sistek sitting in my studio here in Stockholm back in 2019. When we had the first core idea down- the song felt like a DISCRETE meets reggaetón track. This made me really envision the idea of having a Latin artist on the record and we reached out to Dylan Fuentes and asked him what he thought about the record. He loved it and since we’re big fans of him it all made sense to make him jump on the record. I’ve been a huge Ouse fan since 2018 and I could really hear him on the track where we reached out to him and his team which did an incredible effort recording the first verse & the choruses.

When Ouse & Dylan Fuentes were on the record I really felt there was something missing with the record. We sent a version over to Kiesza’s team with Ouse & Dylan on it and she and the team loved it. We even had a part written for her which me and Tudor made, but then when I got the vocal stems from her, she’d also sent an alternative version where she had written something on herself. I was blown away hearing her part and I absolutely loved it, so we scrapped our idea and kept hers!

You never even met your collaborators in person. Did that change the overall vibe of the song since it was created virtually? What was that experience like working remotely with numerous fellow artists?

It’s been different for sure. But 2020 was different in many ways and Zoom sessions were getting popular as well. Now it feels like Zoom sessions are part of our everyday life and working on music remotely is something common these days. Everyone actually did their parts completely remotely and I really wanted the artists to feel like the record was something personal for them as well and not just another featuring song so when I got sent the stems it was the very first time I heard their versions and I barely sent back notes to any of the artists when getting sent the stems. They all did their own touch which really speaks through in the record.

Were you involved in the music video’s concept or visuals at all?

I’ve been honored to have the creative team at Astralwerks and NEON16 with me to join forces and really play around with the creative ideas behind this record. Music really speaks to me visually as well and I’ve always felt cover-art & music videos can really empathize what a song really means. The music video has been a huge production with a lot of teams involved considering each and every part of the music video had to be made remotely. So we’ve had one camera team up in Iceland, one in Colombia, one in Los Angeles and lastly our director Adrian Villagomez in Quebéc, Canada who shot the storyline. I’m amazed on how this music video turned out and thankful for every single person involved in the process of making this.