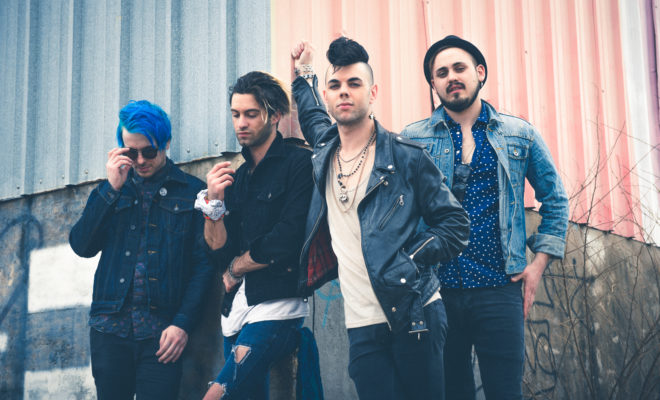 We got the wonderful opportunity to chat with Micky James, lead singer of The Karma Killers, about their tour with Dreamers, their debut EP, Strange Therapy, playing Warped tour, and more! “Part of the reason we started The Karma Killers is to try to lead other people to the rock & roll and punk and pop music that we love and that means so much to us,” says Micky. “The idea of people listening to our music and getting in line with our vision, and then taking all that to the next level is one of the most exciting and humbling things about being in this band.” Check out our interview below to learn all about this hot upcoming band.

AT: You’re currently on tour with Dreamers. How is the tour going?
MJ: “It’s going pretty awesome so far. We just did a little run around our area: Philly, New York, and Boston. It’s been really fun.”
AT: Your debut EP Strange Therapy came out last year. What was your vision for the album?
MJ: “We just wanted to make something that showed the best representation of The Karma Killers. We wanted to give the listeners a little taste, a little glimpse of what’s ahead. There are some songs on the EP that are definitely setting the platform for our record, which we are about to start working on.”
AT: Your sound is very old school rock and roll with a mix of pop punk. What bands influence your music?
MJ: “We always get the pop punk thing, and I think there should be a nice dash right in-between pop and punk. There are pop punk bands, which are a lot of Warped Tour-ish bands but we are just influenced by pop and then punk. We are a punk band with pop sensibility. We are influenced by so many things. A lot of English bands. A lot of New York City punk bands. The Ramones, Talking Heads, The Cure, The Beatles. We love a lot of 70s rock. It kind of goes across the board for us.”
AT: You recently performed at South by Southwest. What can you tell us about that experience?
MJ: “It was great. We only played a few showcases this year, so we had a lot of time on our hands to catch other bands. The showcases we did were fantastic. The first one we did was with our tour package. It was with Dreamers and Arkells, which was really rad. We did another one at Buffalo Billiards. That was cool. It was a much bigger room. SXSW is always a blast. There’s so much camaraderie going on and so many amazing bands playing. It was fantastic. Hopefully we play next year and can have more showcases.”
AT: You’ve also went out on Warped Tour. Do you have any crazy Warped stories you can tell us?
MJ: “I think Warped tour alone is chaotic. It is an outdoor festival everyday in the blistering heat. For a new band, it was our first tour so we kind of had some proving to do. We really worked our asses off. We got up at 6 am every morning, flyered the place, and tried to meet as many people as we could. Warped Tour definitely did us justice for sure. For any band, especially upcoming, it really helps you out. You start to build an organic fan base and that’s the amazing thing about Warped tour; Those fans are diehard kids and they will stick with you for the rest of your career. The one amazing thing about Warped Tour is definitely the demographic and the fans.”
AT: Was Warped your first tour ever?
MJ: “Yeah, it was our first real national tour. We did SXSW in 2015, which wasn’t a tour, but it was our first time traveling somewhere kind of far. So yeah, Warped Tour was our first tour.”
AT: If you could tour with any three bands of your choosing, who would it be?
MJ: “God that’s so hard. I’ve never thought about touring, but I’ve thought about opening one show. I guess the ultimate goal is to open for The Stones, right? For any band, that’s a dream. I feel like my parents would definitely think I made it if I opened up for The Rolling Stones. We aren’t even crazy Stones fans, but they are the pinnacle of freaking music. Theres’s a lot of great bands out there right now that we would definitely take the opportunity to tour with.”
AT: What’s next for The Karma Killers?
MJ: “After this tour, we are going to try and get into the studio for real. Every time we go into the studio, we get booked for a tour, so we never really get to dive into the creative process. After this tour, the number one priority on the agenda will be getting back in there. We have had songs going around for years. Any chance I get when I’m back in New York City, I record. Definitely after this tour, we will be working on new music. Hopefully you can expect something out by the beginning of the summer.”