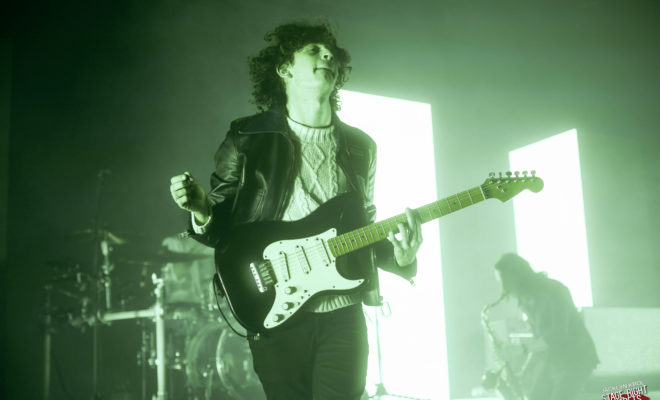 Even though it’s winter outside, the inside of Chicago’s Riviera Theater was burning hot thanks to the sold out crowd for The 1975 show featuring Swim Deep.  Unfortunately, we only caught the last song for Swim Deep, but even at their last song they still brought energy and sounded fantastic.  I had yet to see The 1975 live but I’d heard great things. The crowd was so intense that girls were passing out left and right. I was shocked at how young some of the fans were and at the smaller size of the venue for the band.  The band does something very smart by playing a tone in between the opener and their set, when the tone gets louder it’s closer to the time they get on stage so fans can tell when they’re going to be coming on. 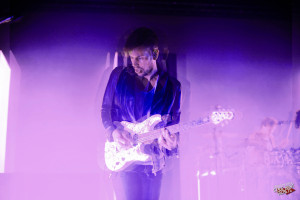 The production value their show has is jaw-dropping. The entire backdrop is composed of screens that change scenery and lighting.  It started off as a static TV and then went to a skyline with a ton of different projections, not to mention their strobe lights and signature square box lighting above their heads.  The band started off their set with their current single “Love Me”; the screams were deafening and it seemed like everyone in the crowd was screaming along.  At one point Matty told the crowd if anyone falls or stumbles, to pick them up and kiss them.  Caring for other concert-goers and helping each other is something that I feel has been missing recently, and seeing it here was nothing short of amazing.

They balanced their set well with most songs being off their debut album, along with new unreleased songs off their upcoming album “I Like It When You Sleep, For You Are So Beautiful Yet So Unaware Of It”.  The new songs included A Change of Heart, She’s American, Somebody Else, and The Sound. All of the new songs still remain true to their first album’s sound with a more focused 80’s vibe. 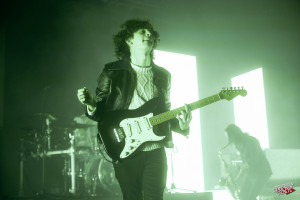 I was unsure of how they would be able to live up to their previous album I listened to quite a few times, but they did.  Their energy and passion was something that wasn’t fully conveyed in their debut album, so it was great to see them perform it live.  The fans response was almost like a hypnotic state the band put them under. They were with them the entire show- even in between songs where they were either just talking or grabbing a drink.  I was definitely surprised at how well they performed and HIGHLY recommend you buy a ticket to their upcoming tour.