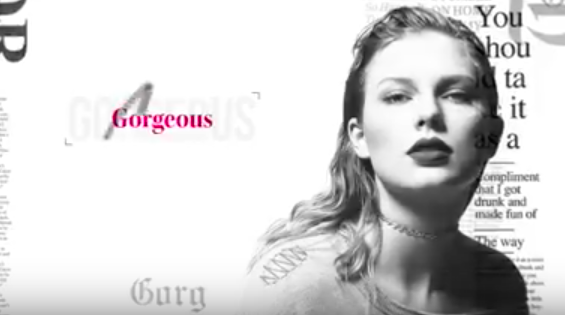 When it comes to a new Taylor Swift album cycle, the world wakes up and the music industry can’t help but get hopeful once again. Swift is a force to be reckoned with and she proves this with every album she drops. The pop star isn’t one of the best in the industry today, she is the best and the most iconic in the modern day world.

After a three year hiatus, Swift is finally back with new music. Back in August, we heard the sassy lead single from her upcoming album reputation entitled “Look What You Made Me Do”. Just a few days later, we received the cunning and sharp follow up promo single “…Ready For It?” And now, we have a new track on our hands and this one is pure and soft in the best way possible. On October 20, the songstress dropped another track called “Gorgeous”. The song is infectious, lyrically sharp, and showcases the season Swift is at in life right now; all things that make us excited in the Swift world.

The track kicks off with an adorable baby voice who speaks the word  “Gorgeous” before the beat hits. Once the beat hits, the song will be stuck in your head for days but it’s not just the beat that gets us. The lyrical content in the song is what makes the song what it is. Swift kicks off the song telling a story about coming on too strong to a person she finds attractive and is clearly comfortable enough around to make fun of the way they talk. Her honesty is ever so cunning and it’s artistically brilliant.

“You should take it as a compliment / that I got drunk and made fun of the way you talk / You should think about the consequence / of your magnetic field being a little too strong,” she sings in the first verse. All in all, the track is pure and sassy all at once, stating how mad she is at someone for being so gorgeous.

But the cleverness doesn’t just end at the verses. The chorus adds to the brilliance of the track. “You’re so gorgeous / I can’t say anything to your face / ’cause look at your face / and I’m so furious at you for making me feel this way / But can I say? / You’re gorgeous,” she sings. Following the chorus is more sharp lyrics, explaining a story that only Swift could tell properly.

It continues on explaining the situation between Swift and the other half, but does it end well? We think it does. She stumbles home to her cats, and that’s a beautiful way to end a night out. And only Swift would bring her cats into a song in a way that makes perfect sense. Yes, she’s a genius who does not get enough credit for her clever artistic craft.

Overall, the track is a must listen, especially in your car with the windows down. It’s a track that will be stuck in your head for days and believe us, you won’t want it to end. So, stop whatever you’re doing right now and listen to “Gorgeous”. You won’t regret pleasuring your ears with what you’re about to hear.

Check out the lyric video for “Gorgeous” below:

← Previous Story Bryce Vine Takes Over The Peppermint LA! Travelogue Tour Vol. 3
Next Story → Taylor Swift Sounds Like a Daydream in New Song “Call It What You Want”