SOUNDS FROM THE WORLD | TAL (France)

Hey guys! You know how I’m always making you travel to meet bands and sounds from everywhere in the world? Well, this month, I thought that I would be cool to take you home to France with me. Now, though i don’t usually (…never) listen to French music, or at least music sung in French, I fell in love with this artist I’m about to introduce to you at the first listen.

Born in Israel 24 years ago, Tal Benyerzi and her family moved to France when Tal was just one year old. Raised in a very musical home, Tal begins to learn to play piano and guitar at age 3. Around the same time, she also enrolls in dance lessons and takes part in a theater group. Growing up, she and her brother start playing in piano bars making interpretations of classics and contemporary songs, and dancing to Michael Jackson, whom they were both huge fans of.

In 2009, Tal signs her own record deal with Sony Music and starts working on an album with songwriter and producer Laura Marciano. Sadly, the contract is cut short by the label due to difficulties after one single. Tal is soon offered another record deal by Warner Music France. Three weeks later, the label has her opening for Alicia Keys during a show in Paris. Due to the success and demand brought by the show, Tal then starts working on her own album Le droit de rêver (“The Right to Dream”) and releases it on March 19, 2012. Mixing pop melodies, urban rhythm and some classical arrangements, the album, which features a collaboration with artist Sean Paul, peaked at #4 on the French charts, and was recently certified 4x Platinum. 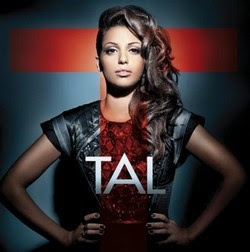 After quite an eventful year, during which she wins her first award and even shortly competes on Dancing With The Stars, Tal releases her second album A l’infini (“To infinity”) in September 2013. The albumfeatures once again various music style, including pop, R&B, hip-hop, and even reggae as well as collaborations with US rapper Flo-Rida and UK X Factor winning girlgroup Little Mix. Faithful to what she believes in, Tal’s songs deliver a message of hope and peace, without religious or cultural barriers, and without boundaries.

The 24-year-old singer is currently on her first headlining tour across the country, and just released her latest music video featuring French rapper DRY.