SOUNDS FROM THE WORLD | Kodaline (Ireland)

What’s better than taking you to Ireland with this month’s feature to celebrate? I recently discovered a Irish quartet that I’m sure you’re going to love as much as I do: Kodaline.

Formed in 2005 in Dublin by childhood friends Steve Garrigan and Mark Prendergast, it’s under the name of 21 Demands that the rock band independently released their debut single “Give Me A Minute,” which topped the Irish Singles Charts in March 2007. However, it wasn’t until 2012 that it all changed for the band. And it all started with a makeover. Far gone was 21 Demands, the group made their comeback under Kodaline. Steve and Mark also recruited two band members who happened to live in the same city and who shared their love for music, drummer Vinny May and bass player Jason Boland.

By the end of 2012, the band had started fresh, signed with RCA Records and released their first EP, The Kodaline EP and filmed 5 music videos. The extended play was greatly received by critics, including England’s infamous radio station BBC Radio 1. Their single “All I Want” was well received by the United States, and featured on ABC’s Grey’s Anatomy, The CW’s The Vampire Diaries, or again in Google’s 2012 Recap Video. In the following 10 months, the band released two other EPs which would be followed by the release of their debut album in June 2013. First in line was The High Hopes EP, which was released on March 17, 2013. Lead single “High Hopes” became the band’s second #1 single. A few months later, the band released their Love Like This EP, only two weeks before releasing their very first studio album In a Perfect World on June 17, 2013.  The album, which included 11 songs –4 already released singles and 7 new songs– soon became #1. The group then released their Brand New Day EP, which included a remix and a duet version of single Brand New Day, as well as an acoustic version of their single “Perfect World.” 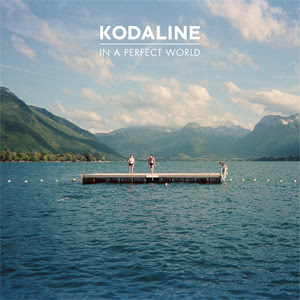 Since then, the group has been unstoppable, whether it’s with their music or with touring. “Music should have a purpose, you know,” shared lead singer Steve, “Our purpose is honesty. [Music] is therapy for us”. Currently on tour, the band took the time to stop by the American Idol studios on March 5th to perform during the Top 12 Results Show.

As soon as the group wraps up their current sold out UK tour, they will head to Australia for a 6-dates run in April. The boys will then head back to Europe for another leg of their tour, including stops in the UK, Luxemburg, Italy or again Belgium.

KEEP UP WITH KODALINE: