Sam Hunk, I Mean Hunt and His Rise To Fame

Let’s face it, if you don’t know who Sam Hunt is then you have clearly been living under a rock since at least October 2014. This is when his debut album “Monevallo” was released and sky rocketed to number one in the first week. The now cover model for Billboard’s Music’s Men of Style Issue has had quite the rise to fame but long before he was performing for thousands of fans he was living in Nashville writing songs, trying to breakdown barriers of what country music “should be.” 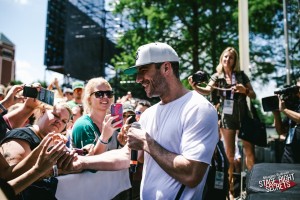 -2014 was a big year for Mr. Hunt when Keith Urban released “Cop Car” which he also co-wrote, it debuted at number 8 on the charts

Sam Hunt will continue to take the world by storm; whether it be his stage presence, his raw honesty, or his genius songwriting skills. No matter what, we can’t wait to see what he has in store for us next.