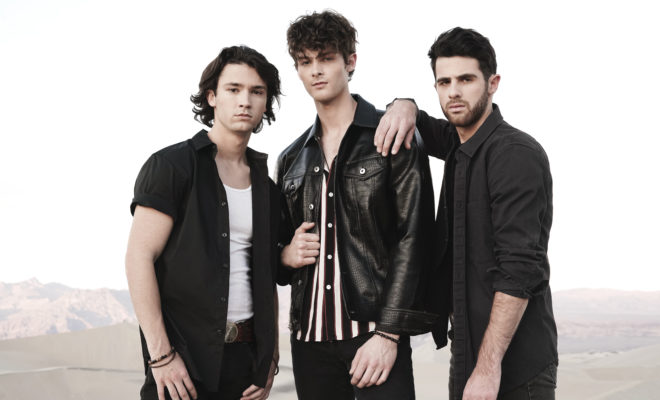 Stage Right Secrets caught up with Restless Road to talk about their EP, working with Kane Brown, and their full-length record in the works. Read the exclusive interview, below.

Congrats on your EP! How did you guys go about choosing which songs would
make the cut?
We had written over 200 hundred songs going in so we knew it would be
tough. It was important to pick the songs that demonstrated our voices
individually as well as in harmony. We also heavily leaned on the opinions
of our family, friends, and team because at the end of the day it’s no fun
singing songs other people aren’t crazy about!

What were your reactions when you got the support from John Denver’s
family for “Take Me Home”?
We were extremely humbled. John Denver’s music was a big part of all of
our lives growing up. Zach remembers his mom introducing the music to
him at a very young age while driving through Yellowstone on a family
vacation. Colton, who is a West Virginia native has grown up with “Take
Me Home, Country Roads” as his state song.

Now that you have a collaboration with Kane under your belt, what are other
collaborators (could be songwriters/producers as well) would you like to work
with?
We think a dream collab of ours would be Kacey Musgraves. Her music is
amazing and she’s a great story teller which is something that’s important to us and
something we love to do. I think our voices would blend well together and we
could create something really unique.

You’re headed towards your debut full-length album; do you have any songs
chosen? How far along in the process are you?
We’ve been writing pretty much nonstop the last year, so we have a ton of
songs in our catalog. We have an ongoing shortlist of our favorite songs and
we are constantly trying to beat them before we go into the studio. When it
comes to songwriting, we have a mentality that goes make your good better,
your better your best, then make your best better.

We saw the video of you guys shaving each other’s quarantine beards, who’s
idea was that?
It was a collective idea that the 3 of us came up with! We knew that we would be
in quarantine for quite a while, so it seemed like a fun idea at first to just grow the
largest beards we could. It later evolved into a game where we tried to see which
one of us could get the funniest looking facial hair style possible.

Your Quaranstreams were so amazing, how did you guys approach the
livestreams compared to a traditional concert?
There’s definitely a different approach you must take when you’re putting on a
live-stream instead of a concert venue packed with people. I think the thing that
stays the same is the fans. Either way, you know that on the other end there are
people who are connecting with your music and supporting you and that has been
the best part of all of this. We’ve tried to find every way to stay connected to fans
and get to know them, and it’s been very enjoyable getting to know everyone
through our live-streams thus far.

What have you been doing with the free time at home?
One of the biggest quarantine activities we have gotten into recently is disc golf.
None of us had ever played before the quarantine started. We found it was a great
way to keep our social distance but also be in and around nature instead of just
staying inside! We also found out that it’s a lot harder than it looks.

Do you find it easier or harder to be creative while at home during this time?
Actually, we think that this time has been very good for creativity. It’s shown us
that sometimes you have to get back to the basics and slow down for a while to
find inspiration. We’ve stayed in touch with co-writers over the website Zoom.
Almost all of the songs we’ve written were just with a few people with webcams
and acoustic guitars. It’s really shown us that you can find song ideas and
creativity no matter what is going on around you!

What song or album made you fall in love with music initially?
Garrett: One song that I can remember making me fall in love with music is “Real Good
Man” by Tim McGraw. I was very little, and my mom took me to a talent show for
her work and they let me perform it for everyone. I remember how exciting it was
to be on stage and sing that song to everyone watching. I also remember it just
being an incredibly fun song to sing!

Zach: Your Man by Josh Turner. It was the first song I sang that helped me discover my
voice. I would sing it anywhere anytime just practicing it over and over. I
eventually worked up the nerve to sing it to my high school crush and she liked it
and we went on a date. That was all the reason I needed to keep singing.

Colton: I think the Rascal Flatts “Feels Like Today” album was the first album that really
made me fall in love and want to play country music.

Was there a specific moment when you realized that you wanted to make
music your career?
Garrett: I think I first realized I wanted to pursue music as a career when my dad brought
home a cherry red electric guitar when I was 12 years old. My dad wanted to be a
Rockstar when he was in his teens, so we really bonded over that guitar and talked about music constantly.
After I played his guitar for a few months I knew it was what I wanted to do with my life!

Zach: I did a talent show my junior year of high school. I was so nervous I thought I was
gonna be sick. No one had ever heard me sing before. Not even in choir. After the
crowd’s positive response, it gave me the confidence to pursue singing further.

Colton: Music has always been a really important part of my life, but I realized I wanted to
make this a career when I was in high school.

How did you get into songwriting?
Garrett: I started when I was in high school. I would listen to the radio and hear all these hit
songs and started trying to write catchy songs that were about what was going on
in my life!

Zach: I started off by humming melodies and typing words in my phone before I went to
bed. Once I had a good start on something, I would show my journalism teacher
who was also interested in songwriting and recording. I would skip class and
during his planning period and we would record the songs I wrote into an actual
demo! I’m very thankful for that teacher!!

Colton:I decided I wanted to start writing when I was in high school. I loved doing it and I
knew I had a lot of work to do in order to get good at it. Like anything though it
just takes a lot of repetition.