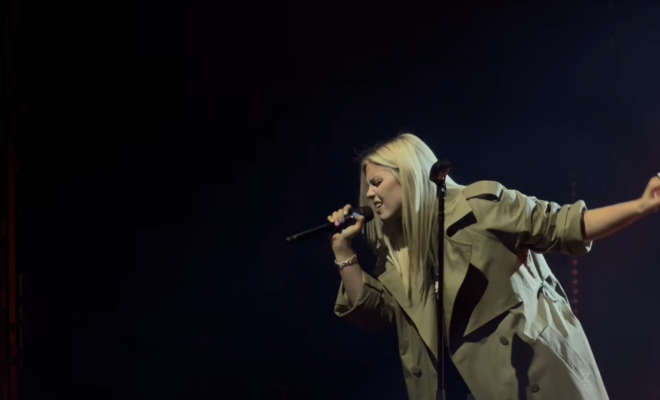 Reneé Rapp Keeps London Fans On Their Toes (at least, what’s left of them)

There are not many people whom I would stand in line for 7 hours in the middle of January in freezing London Town for, but Reneé Rapp is one of them.

Now let me preface this by saying that I jumped on the Reneé Rapp train pretty late. I knew nothing of her stellar performance as Regina George in the Broadway adaptation of iconic movie Mean Girls, and I had spent the last couple of years telling my best friend that sure, I’d watch that show about college girls and their sex lives that she was constantly texting me about.. eventually.

So when I did eventually watch the show (when season 2 of Mindy Kaling’s The Sex Lives Of College Girls premiered on HBO Max/ITV in November 2022), I was pleasantly surprised to meet Reneé Rapp, the actress. Her undeniable charisma as closeted and wealthy college student Leighton Murray instantly drew me to lean deeper into Rapp’s career, and thus into her new musical journey. And that’s how I ended up flying to the UK and lining up in the freezing cold for 7 hours, merely three months later.

As I queue, I come face to face with Rapp’s vast demography of fans. It’s barely noon when I get there, and there are already 80 people in line, some queuing since as early as 5:30 am. As more and more fans pour onto the street, I understand why the venue for Rapp’s one-off headliner show had to be upgraded twice. After the 600 tickets for Lafayette sold out in minutes (yes, I was READY!), the venue was moved a first time to Heaven, which has a capacity of about a thousand more people. However, due to exceeding demand, the show was then moved to the O2 Forum Kentish Town, boasting a capacity of 2,300 people. That last upgrade officially marked the show as Rapp’s biggest concert to date.

Although Rapp’s two other shows of the week were private radio showcases in Paris and Berlin that fans could only win tickets for, the London gig was open to all, and fans thus traveled from across Europe to attend and show their support. And from the second the show kicks off with the instrumental intro “Everything To Everyone”, you can tell fans are conscious of how crazy it is that the American artist is playing in Europe merely 6 months after starting her musical adventure.

Within the next hour, Rapp performs all 6 of the other songs from her debut EP Everything To Everyone, which came out in November 2022. She makes her entrance to “Moon” to get a feel of the room, and fans are more than happy to show their excitement by singing back the lyrics and waving their arms along to the song. As a wide grin takes over the artist’s face, you can clearly tell she’s been waiting for this moment for a while now.

As the 23-year-old moves on to perform “Tattoos,” the first song she ever promoted on TikTok, the crowd holds up paper signs reading “we are so proud of you,” that fans had passed around earlier in the day. And when Rapp scans the room full of love declarations, you can tell the bond she has with her fans is so strong and the love mutual.

That connection with her fans is felt throughout the whole show. In between songs, Rapp engages verbally with fans, reading signs, taking BeReal’s and imitating their British accent. Quite a few times, she even laughs and blows kisses mid-song, only to then blame herself and her ADHD diagnosis for her lack of focus. These interactions give the show a personal and intimate vibe, similar to shows she’s done in the past, although there are a lot more attendees in London.

2 300 attendees make one heck of a choir though, and so when Rapp has her crowd harmonizing to every song word for word, she can’t help but scan the room once more in wonder. As her crew brings out her distinctive white piano on stage, a loud roar can be heard in the crowd. Rapp is indeed known for making personal and sentimental music for people who are “either queer, sad, or both,” and it seems like she’s met her demographic. Following the emotional “Don’t Tell My Mom,” the artist rewards her fans’ dedication with a live performance of her unreleased song, “Bruises.”

Although Rapp’s setlist is short, with her having only 8 songs out on streaming platforms, the artist curated it in a way that keeps fans on their toes at all times. Slower songs are alternated with up-tempo ones, and while her crew switches the piano for a bass, Rapp fills the void with some more fan interactions and cute anecdotes about each song.

The mid-show tranquility comes to an end when the first notes of “Colorado” ring next, followed quickly by the now-infamous “In The Kitchen.” As the much awaited “strangers to lovers to enemies” line comes around, the passion in her fans’ voices is so loud and deafening that it makes Rapp tear up. At that moment, there is not a dry eye in the room. Among the people Rapp traveled to London with, are her mother and her best friend/The Sex Lives of College Girls co-star, Alyah Chanelle Scott. The pride and tears on both of the women’s faces does it for Rapp, who lets a few tears fall before jumping into the final song of the night, “Too Well.”

Reneé Rapp’s stage presence is natural and her vocal technique flawless. The songstress’ stunning and effortless vocal prowess is an unmistakable sign of her musical theatre background, and one that we can’t wait to see again when she makes her comeback as Regina George in the upcoming musical film adaptation of Mean Girls on Paramount+. In the meantime, Rapp has a few more live performances ahead of her, and if you’re able to attend one of them, I cannot do anything but urge you to go. When Rapp gets on stage to perform her own music, it’s like she owns the whole place. Making eye contact and interacting with as many fans as she can, Rapp’s sarcastic and goofy personality shines brighter than all the flashlights in the crowd.