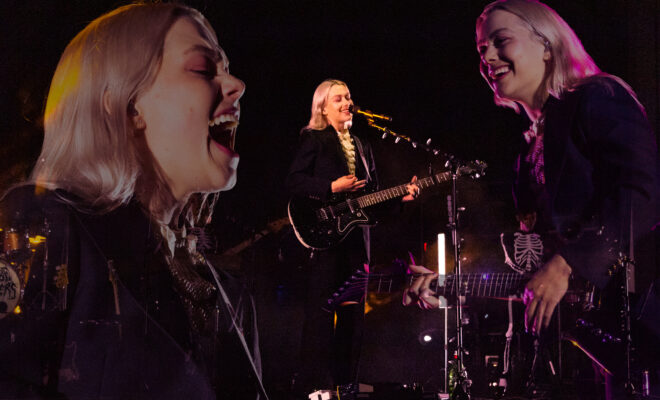 Phoebe Bridgers recently played two nights of sold-out shows at the Leader Bank Pavillion in Boston. Opening for her on this tour is MUNA, a dark pop girl band from Los Angeles.

MUNA is comprised of Katie Gavin, Josette Maskin, and Naomi McPherson. The group got the audience on their feet and dancing as the sun went down over Boston Harbor. They were joined on stage by Bridgers for their hit song “Silk Chiffon”. The lighting for this song was made up of the colors of the lesbian flag and alternated on the stage to the beat. The entire MUNA set had beautiful rainbow light displays to represent the LGBTQ+ community.

Bridgers and her band walked on stage to “I Gotta Feeling” by the Black Eyed Peas, which she told us was an homage to a mix-tape she made for a crush some time ago. The setlist was a mix of both her albums “Stranger in the Alps” and “Punisher” with an encore cover song of “That Funny Feeling” by Bo Burnham.

The Leader Bank Pavillion is an outdoor venue with an overhead canopy and the lighting designer did not disappoint with their utilization of the blank canvas. Swirling and twinkling lights graced the underside of the canopy creating an angelic scene. The use of stage lighting, fog machines, and extraterrestrial backgrounds made for an out of this world show.

Bridgers’ unique ability to captivate her audience solidifies her as a must-see artist.