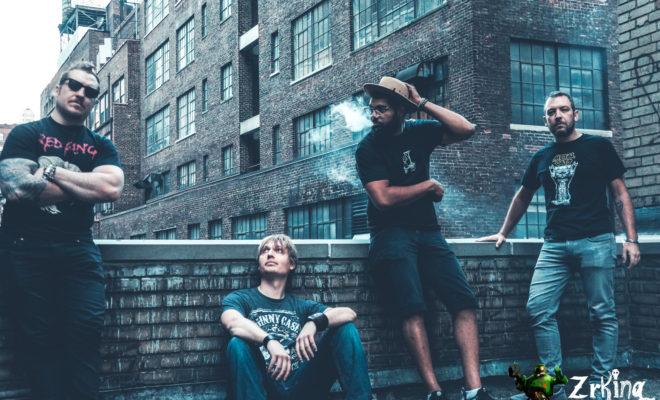 Our Exclusive Chat with Zr. King

What is the story behind your latest single?
Our last single is called Ships in the Night, and it’s from our latest album, Musically & Morally Bankrupt, which we unleashed in late May. We like to think it’s a treatise on doomed relationships. You ever spend so much time investing yourself – the best possible version of yourself – into a dyad you know (if you speak to yourself honestly, at least) is ultimately doomed to fail? And often, in those moments, you spend so many nights lying awake asking yourself, “Why is this other person so obtuse? Why do they not see all I am bringing to the table, all I am offering of myself to them?” – Well, that’s Ships in the Night. Aside from the more literal takeaway of the name (from Longfellow) that these two forces interact in only a transitional manner, or almost encounter each other but then don’t; we take it a step further, in a more suspended way: one has a heightened sense of their intersection, the other can only appreciate it in hindsight, after anything tangible has already crumbled.

That was a mouthful: breakups suck; the person telling the narrative always frames it as them being right, and the other wrong. This is an extension. POV is everything.

When did you realize music was your calling?
That cuts to the bone, and goes right back to the beginning. We absolutely adore making music. That has never changed, and so long as it doesn’t, we’ll keep it up. Between the different bands we’ve been in, the dudes that make up our outfit have been making music for a combined period that is longer than the average human lifespan. That’s 79 years, at current, for those keeping score. Have you ever seen that cartoon of Gary Busey where he looks at his reflection in the mirror and asks, “How’m I doing today, Gary Busey?!” And his reflection says, “You’re doin’ great!” And so he says, “GOOD! Then I’ll keep it up!” That’s our attitude. It’s worked so far, we don’t futz with the formula.

How would you best describe your sound?
We field this question often, it’s always a challenging one to answer because of how widespread our influences are and how every time we ask a friend or fan what they hear, we get different responses. So we’ll approach this differently than the standard comparisons: if you look at our latest album, here’s a track by track play-by-play of what we feel it sounds like:

Welcome to Bearizona: The internal combustion engine attains self-awareness, murders all bicycles in the contiguous United States, and settles in Arizona on a badass alpaca farm where the filtration system pumps nothing but smooth amber Tecate into every faucet.

Don’t Call Me On Saturday: We throw a party so raging on a Saturday night that there is an emergency session of Congress to revise the standard calendar system. This results in Friday becoming 48 hours long, Sunday a 36 hour day of rest, and Saturday its own 12 hours of relentless partying. Thus diminishes the current standard US workweek from 5 to just 3 days. The population erupts in celebration. A new federal holiday is established: St. Zr. King’s Day.

Edgebot Planet: We topple the government and instill our own; our credo: Life, Liberty & The Pursuit of Revenge.

At A Distance: Ok, this one kind of sounds like Alice in Chains and heavier Stone Temple Pilots, but put through the filter of Led Zeppelin (for the riffs), The Beatles (for the harmonies) and Mozart – think Lacrimosa (for the strings and piano).

What do you hope listeners take away from your music?
Ultimately, that they enjoy it. We can get up into the weeds of what we do, but ultimately, we make music because we love doing so – getting together, ripping through tunes super loud and proud, and hitting all the riffs, breaks and choruses that make it epic. And we love executing it live, different as it may be in some regards – we want our performances to be one of a kind, every time, and something you can’t turn away from. There are aspects of that approach that get lost in the modern day super hi-fi sheen of recorded music. It’s very different to go see an ensemble of musicians put the pieces together in front of you vs. listening on your iDevice or in the comfort of your own home; you have to engage, interact, find a way for it to really mean something to you as a listener. Music isn’t take out food or a puzzle you can set the difficulty to such to suit your needs; if you really dig it, you have to put some effort in. And there are tremendous rewards if you’re willing to put in the effort. And if not, that’s cool too – we’ve been doing this for 20+ years and aren’t going to stop.

Who are your dream collaborators?
So, not necessarily a trick question here, but let’s approach this a few different ways:

If you assume we could achieve a level of success to set the precedent, a lot of our dream collaborators are the very people we make music with today: Jerry Ramos (of Mercury Recording Studio), Cancion Franklin, Jaime Garamella, Lauren Stockner (and all the fucking bands she plays with, holy shit, it’s like a million), Alex Yacovelli/Rich&Pretty, Rob Farren, the guys that make Ronin Guitars & Basses, Thrilldriver, The Spanish Channel, Walter Parks/Swamp Cabbage, Royal Skulls, Dark Moon Apache, Bad Citizen; the list goes on and on.

If you assume we establish ourselves enough to pull in some of our DIY faves: we would take time (hands down) with Roger Clyne & The Peacemakers and The Supersuckers. All. Fucking. Day. Long. We are in awe of how those guys keep the flag hoisted and hammer the work home, day in and day out, with minimal support from the major streams.

If you assume the world is our oyster: we’d get in tight with Muse, Primus, Mastodon, Clutch, Corrosion of Conformity, Slash & MKATC, Metallica, QOTSA, Rammstein…that list goes on and on.

If you assume the world is our oyster and reanimation is a thing: Ozzy w/ Randy, Zeppelin, The Beatles, Tom Petty, The Wilburys, again, that list goes on and on.

Is there a possibility to perform your new music live?
Heck yes there is, we’re already doing it. Come see the latest insanity at our show at Bowery Electric on 7/20 with our insane buddies in TIGERMAN.

What are some albums that really shaped you as an artist?
Gonna throw a bunch of stuff out on this one, as it really spans the gamut:

QOTSA – any of ‘em, and Eagles of Death Metal too

Foo Fighters – Self titled & The Colour & The Shape

What are some of your contenders for best song of 2019?
Rammstein – AUSLÄNDER. That’s the best song we’ve heard so far in 2019 (next to our own, Don’t Call Me On Saturday). Dream Theater’s new album is good, but it’s not as good as Rammstein’s new record, and Muse’s Simulation Theory came out in 2018. We need some new kick ass rock’n’roll. That’s the void we’re poised to fill.