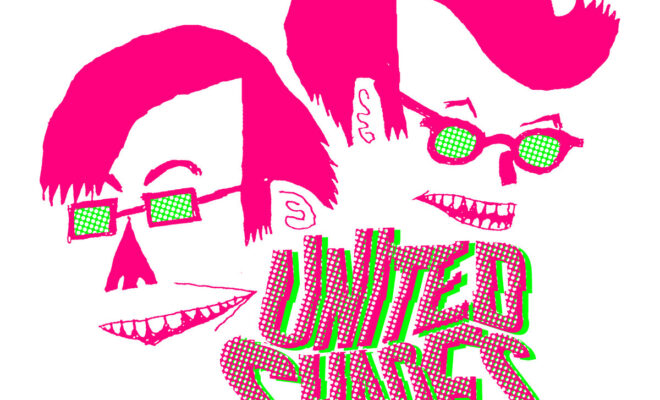 Our Exclusive Chat with United Shapes

After eight demos as a duo, United Shapes are releasing their first album. Naturally, we had a lot to chat about over email!

How do you manage to stay friends while part of a duo?
Joseph: We are both very laid-back types. It is more important to us to have fun and stay friends than to tyrannically control every step of the music process like some people in bands do. We trust each other’s instincts. We both know what we’re good at. We have so much in common, we’re practically twins. Also, I barely ever see him in person. He is a mythical swamp ape.

Drew: United Shapes and this album in particular has enhanced rather than hindered the friendship. The way the first songs we made for this album sounded more like us I would say got our attention more than usual and got us saying hey, let’s do more than demos this time. Theres nothing like a collaborative project to bring friends into new friendship territory or maintain a close connection, and I recommend it to anyone.

Do you remember what your first impressions were of each other when you met in seventh grade?
D: We were both pretty quiet at that time because he was new at our school that year and I kept to myself as a rule too. It took time and after-school hangs (we had parents working at the same elementary school) to realize our common interests and forge an alliance. First and third and fifth impressions were I guess general things, like not having to explain any movie or TV references, or not hitting the conversation dead ends I would hit with other kids. He was usually on my frequency, or at least acknowledged it with interest and humor when he was not. Classic best friend stuff.

J: The first day of the seventh grade, I happened to sit next to Drew. The second day, his was the only name I could remember out of all the students, so I only spoke to him. I remember thinking he had a dorky haircut. But photos will prove beyond a doubt that we both had super dorky haircuts in the seventh grade. We talked a lot about music. Grunge, mostly. I remember thinking he knew a lot about music. His house was new and strange. It always felt like Christmas morning in there. Cups full of ice-cold liquids did not sweat from condensation at his house like they did at mine. I believed his house to be beyond the natural laws of physics and thermodynamics for quite some time.

When did you realize music was your calling?
D: Music was a massive part of the high school years of our friendship. We would discuss in detail the song that was playing in the car or check in weekly to see what the other was listening to heavily on our respective discmen. I really dug the different ways we started doing music individually. I started in earnest learning the trombone in 6th grade in band class, and loved it. Somewhere in the middle of high school, I picked up an acoustic guitar and forced my fingers to make the shapes on ASCII tabs for all the songs I wanted to play. I could summon the tabs impossibly onto my computer with the internet for free and print them out. I also had a tab book of The Bends I got with pool cleaning money, which was real cute. I wore that into the ground. Couldn’t play by ear to save my life. Meanwhile around that time, Joseph was making piano songs at his house by what I understand to be methodically assembling notes he liked into chords and composing these incredibly catchy ragtime-y songs. He had taken no formal lessons ever and he was making these 100% original songs, not just like banging chords and singing, but with right and left hand parts. I don’t know where it came from.

J: My mom wouldn’t let me see Beetlejuice when I was a kid because she thought it would be too scary. When she finally let me rent the VHS from Blockbuster, I watched, then rewound, then watched the opening title sequence again and again because I couldn’t get enough of Danny Elfman’s music. I wore out the tape. I had never heard anything like it before. Something switched on in my brain. I didn’t even watch the rest of the movie until hours later. My mom took me on a picnic, and I was sad. She asked why, and I told her I wanted to write music, but that I’d never be as good as Danny Elfman. She said, “Yes you will!” I’m not sure if she was right, but I certainly owe all of my musical confidence to her.

D: I think it was around 2000 we started talking seriously about co-making songs as a duo. He encouraged me to create totally original things early on, and still eggs me on to do it. I am not as prolific as Joseph in that way. I am happy to make guitar parts and trombone parts, intros and things. I think he’ll always push me to do more complete songs. The encouragement is a good thing.

Compound Shapes is your first official album after eight demo albums. How do you feel you have grown as artists?
D: I think that this was the first official album for a reason. Something clicked in the first two or three songs and we just put more give a shit into the crafting of it. Also, being in our mid-30s, it’s like, ‘ok, now is good. Let’s finally make a full-on produced thing and press some wax.’ It’s a boon to my confidence for sure.

J: Dream pop has slowly been infecting my brain since 2014, so I think the newer stuff I write has more in common structurally with that kind of music. At least it does in my head. I think my lyrics are just getting darker and darker. I tried to write a happy song many times, but it just feels forced and unnatural. I’ve written happy songs in the past, but that was a long time ago. But they’re all kinda funny, so that makes up for it. Sometimes I try to come up with different ways of playing the piano. Earlier stuff I’ve written has tons of bonkers chords with lots of notes in them; lately I’ve been experimenting with chords that have only two notes in them. I’ve become lazier, I think that’s what I’m saying.

What do you hope listeners take away from the album?
J: I want our listeners to be surprised. I get so bored with popular music all sounding the same, using that same chord progression in every song. (The one from “Don’t Stop Believing.” You know how it goes.) I’d like our listeners to feel like they ate a satisfying supper after the album is done. A proper emotional supper. Gravy, rolls, turkey pieces, casserole dish, you get the idea. Exciting and playful at the beginning, rich and thoughtful at the end. An eclectic wine with many flavor notes to be drank out of a paper bag.

D: I have zero expectations. Compound Shapes is something we’re proud enough of to think you should have on your shelf. If you take it out and listen and say to anyone around, “hey, check this out,” nothing would please me more.

Do you have any dream collaborators?
D: Nobody famous. Too self-conscious. Other friends, maybe. Time is a finite resource and I’m a dad of two, so I take what I can get with United Shapes

J: It is my absolute very dream to have an album of ours produced by Nigel Godrich. I love his spooky, smokey style. Everything he touches sounds like pure gravy.

What have you been watching, listening, and reading during the pandemic?
D: Listening to a lot of podcasts. “Neighborhood Listen” with Paul F. Tompkins and Nicole Parker is my current favorite. It’s this great improv character show centered on neighborhood social media app posts. I think improv is wonderful and hearing comedians constantly pursue the goof is my drug. I have been rewatching old Whose Line episodes, and old Space Ghost Coast to Coast too, which we used to look forward to every week. Re-reading Dune too!

J: I can’t watch television or the computer. It’s too intimidating for me. It takes a lot of energy for me to watch a movie. I’ve actually been working on our next album. Got some demos going. Also, I’m a delivery man by day, so my life hasn’t really changed that much because I’m an essential worker. Been getting strange songs stuck in my head, then pulling them up on Spotify. Today I listened to “Take My Breath Away” by Berlin. It is such a masterpiece that I’m not even embarrassed to tell you that that’s what I’ve been listening to. I should be, but I’m not. Also, Ladytron’s latest album (fantastic) and LOTS of obscure David Bowie songs.

What do you think the future of live music will look like?
J: Hologram. Like Wolf Blitzer. (The band Wolf Blitzer, not Wolf Blitzer himself.)

D: I don’t know. If the era of festivals is over, if that was a thing, I couldn’t be happier. Probably they’ll be back in full force when this virus is under control. There is a commercial parody sketch on Portlandia featuring a drone rental service specifically for outdoor music festivals. I’m the target audience for that.