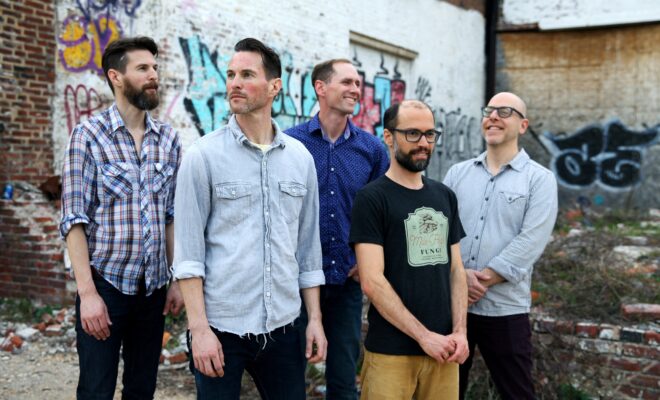 Our Exclusive Chat with LOTUS

We got to chat with Jesse (bass, modular synth) and Luke (keyboards, guitar) of LOTUS on their upcoming album, Free Swim , coming out August 21.

What was the writing and recording process like for your new album Free Swim?
Jesse Miller: Luke and I record demos at our home studios and send Pro Tools sessions back and forth; he lives in Denver and I live in Philadelphia. After many revisions, we send these out to the band and get together for some live rehearsals. From there, we narrow down to the strongest pieces, make more revisions and then head into the studio. For Free Swim, we recorded at Spice House Sound in Philadelphia. For the first two days, we rehearsed and did test recordings and then we did three days tracking the band live while filming. From there, Luke and I edited the recordings and did a few final synth and keyboard overdubs. I mixed the album at my home studio and went back to Spice House to do final 2-bus printing (a pre-master analog sweetening of the mixes).

How do you feel you’ve grown since your last release in 2018?
JM:At the very beginning of 2019, I set up a new studio space designed for mixing and writing. I started taking on more mixing projects in addition to the work I do for Lotus. I think my skills in that department have grown significantly.

What do you hope listeners take away from the album?
JM: At the risk of sounding trite, a feeling of uplifting energy.

Luke Miller: I hope listeners can get lost in it. I kept picturing the album as a kind of Gulliver’s Travels with each song as a different alien place visited by the listener.

Do each of you have a favorite song of yours?
JM: That’s like trying to pick a favorite child. Forced to choose, I’d say “Turtlehead.” I think that track creates a very cinematic mood and brings together a lot of seemingly disparate elements with guitars, dub delays and spring verbs, modular synths all weaving together.

LM: From the new album, one of my favorites is “Earl of Grey.” It’s a laid-back funk/soul tune, nothing too fancy. But I think writing timeless sounding songs that still sound original can be the most difficult thing.

How would you best describe your sound? It has a really unique vibe to it.
JM: It is tough to describe in a neat, pithy way. Instrumental-dance-rock maybe. But, there is electronica, funk, soundscapes and more in there as well. That’s great that you say unique vibe, because that is really what we go for, something that is unique to Lotus.

Our #liveindrivein show Sept 4 in the Citizens Bank Park Parking Lot is now on sale! Pick up your tickets (one ticket per car, up to 4 people) at: https://www.ticketmaster.com/event/020058F1A78B1B4C FAQ about the series: http://phillies.com/drivein

What do you think the future of live music is going to look like? You guys are playing a drive-in show in September in Philly and annually host SummerDance Festival.
JM: Unfortunately, I doubt we’ll see a return of much live music until there is a widespread, effective vaccine. Drive-in style shows are really all we have at the moment, but I think the energy of a crowd close together, feeling, and responding to live music on a big PA is something we all want to get back to.

LM: I got into the survival show Alone. There was something soothing about watching people survive alone in the Arctic just using primitive survival skills.