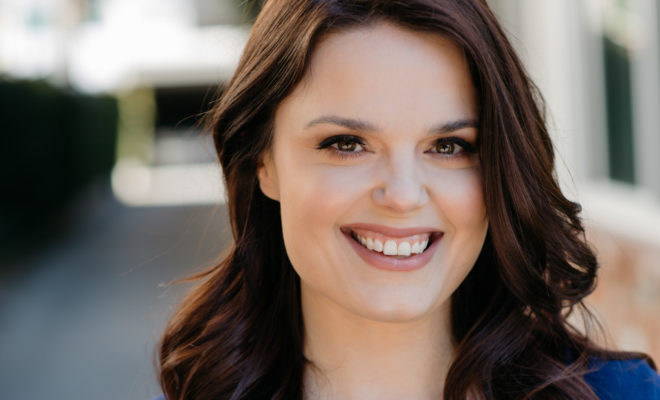 We are just about halfway to Halloween! (Not that days matter anymore in quarantine.) There is no one better to celebrate with than Halloween lover and the star of the Disney Channel Original Movie franchise, Halloweentown, Kimberly J. Brown.

Would you be up for a reboot of the Halloweentown franchise?
Yes! And I think the fans would be too because I get asked that all the time.

What do you think Marnie is up to now?
I think Marnie would be in some sort of influential position in Halloweentown, like mayor or something, continuing to travel between both the mortal world and Halloweentown overseeing new programs and the coexistence of residents from both worlds.

What was your experience like working for Disney Channel?
I loved all the projects I did for Disney Channel! Halloweentown was only like the third or fourth original movie they ever made so over the years I really got to watch the network grow and become apart of more people’s homes. It was really special. I feel so honored that people still want to talk about them and watch them with their families. I’ve met generations of fans that have seen them and it’s just amazing.

What is Spirit of Halloweentown like in Oregon?
It’s awesome! Spirit of Halloweentown is an annual festival in St. Helens, Oregon where we filmed the first Halloweentown movie. Every year, they make the town square look just like it did in the movie and people visit from all over the world. The first year I came to kick off the festival over 15k people came and it was incredible. It’s pretty surreal to go back and be flooded with a lot of great memories.

What inspired you to open up your own Esty shop?
One of my good friends and I used to spend our Saturdays doing a lot of crafting and I’ve always loved being creative with paints and similar mediums. We opened the shop over 5 years ago doing custom paintings and cards among other items. Slowly people started requesting quotes from Halloweentown so I eventually started putting those up as listings as well. I love a good graphic tee so I started trying some designs on shirts and it’s grown from there. The fans have really influenced so much of what you see in the shop.

Things are clearly going well with your boyfriend and Halloweentown II costar, Daniel Kountz. What was your reaction to seeing fans’ reactions to you two dating?
I get a kick out of the fans realizing we are together. The first time I put up a photo of us kissing it went viral and I got all kinds of great comments from the fans. They wanted me to protect Aggie’s spellbook and told me to watch out for him, haha!

You published a children’s Halloween themed book in 2016. What was that experience like and would you be up for writing more in the future?
I worked with a writing partner on the book and took my love of drawing and painting into co-illustrating it as well. I have young nephews and wanted to share my love of Halloween with a younger audience. There’s so much magic in the fall time of year so I loved the idea of a magical pumpkin patch and all the friendly characters who play and look after the pumpkins.

You originally started out on Broadway. Would you ever go back or consider doing some TV musicals?
Maybe even release an album? I would love that! I love musical theater so much I try to see anything and everything I can when shows come to LA or I go to NY to visit. I’ve written original music in the past for certain projects, but I don’t know that a full album is in my future right now.

What is next for you?
Well as soon as we can go back to work in the entertainment industry I’m supposed to shoot a horror-comedy feature film that was pushed due to the pandemic, so I’m looking forward to that! We are also developing some new products for the Etsy shop to be released late summer, and I continue to write and shoot original sketches and vlogs for my YouTube Channel.