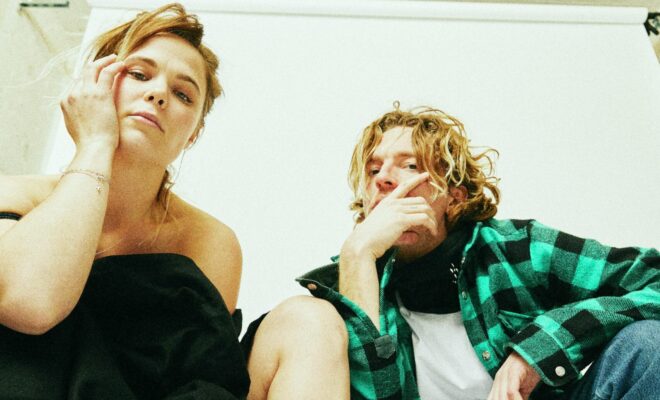 Off Bloom sat down for an exclusive interview to chat about their new music, inspiration, and more.

“Hit & Run” is in the world, congrats! How did the idea for the song come about?

We actually wrote the first demo years ago!! It started out with a vocal chop chorus and that is actually the only part that has changed since then. The rest is almost as it were. We were inspired by a feeling of recklessness and not wanting to commit – just have fun and sometimes hurting someone in the passing!

The video clip you shared on social media to promote the song was so captivating, what will the music video consist of and are you involved in the visual process?

The clip will possibly be made into a longer visual, but our idea was actually to make something that was only a minute long but still opened up a universe and a vibe. We are always very involved in the visual side of our project and this and the last couple of videos we have developed and directed ourselves. The “Hit and Run” visual was created in collaboration with our amazingly talented photographer Anders Witt.

You worked with a number of collaborators, how was it working with different individuals while still keeping a cohesive sound throughout the record?

We are extremely collaborative people and get very inspired by our friends – new and old – and the conversations we have with them about life. The cohesive sound comes by itself in a way because we are producing/exec producing (and on most tracks mixing) everything.

How did working with the legend that is Max Martin come about and what was the experience like?

Yeah that was like a bucket list thing. A dream of ours coming true. We had made the demo for What We Do with our good friend and amazing producer CJ Baran in LA and then after we had returned to Copenhagen he suddenly sent us a text saying that he had played the song to Max and he had some ideas for the track. We didn’t really believe it until we heard these amazing voice memos on swedish-english with Max Martin singing melody and hook ideas for the track on top of the demo!! So cooool!! One of the ideas became the melodic hook line and kinda fulfilled the song’s potential – so the stories about him being the best finisher turned out to be true!

Hmm no not really. I think the album is exactly how we had envisioned it actually. It’s a map of our journey from when we started making music as a band and until now. We wouldn’t change it.

What are each of your favorite standout lyrics from the album?

Mads’ is ‘Am I Insane?’ and mine is ‘Are you feelin it too?’ Both songs about how fucked up hard it is to keep your sanity in a world where social media rules, complexity and nuances are lost and black/white truths define us.

You do hear a few different influences and sub-genres in your music. How have your musical influences evolved over time?

We have always been inspired by everything from Britney to Bowie. We evolve as people and therefore our musical inspirations do too, but I think we will always be defined by our love for pop music and the good song on one hand and our love for the alternative/indie/folk/rock on the other.

Are you conscious of genres when creating your music or do they matter in general?

No not really. When we write we try to stay honest to whatever is happening in that moment and then let it take us to wherever it wants. When we are under pressure we sometimes try to control the process but are always unsuccessful and end up somewhere very different from where we planned. We are really trying not to judge ourselves and the song whilst writing it and just trust the process and let ourselves be. Sometimes we can do that and sometimes we can’t. That’s a lifelong lesson we will keep working on forever I think.