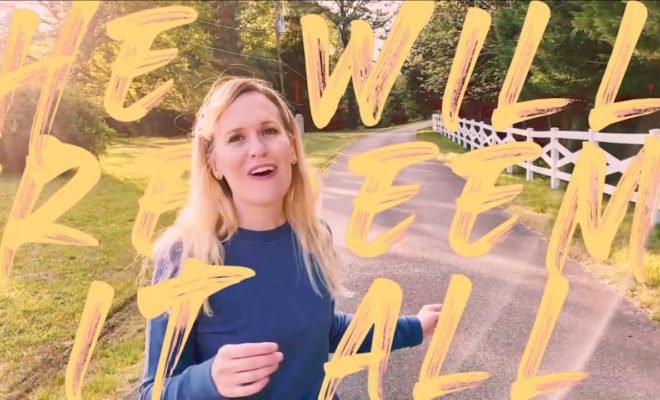 EXCLUSIVE PREMIERE: Melanie Penn’s ‘He Will Redeem It All’

Stage Right Secrets is thrilled to exclusively premiere Melanie Penn’s music video for “He Will Redeem It All.”
[embedyt] https://www.youtube.com/watch?v=lDjQQEY7wIg[/embedyt]
“‘He Will Redeem It All’ started as a dedication to two friends – one had just lost her sister to cancer, and another unfairly lost his job,” Melanie shared. “Both of these friends held their heads high during their trials, trusting that God would operate even while sorrow and uncertainty seemed to carry the day.””Fast forward one year. I had no idea this song would come out as the whole world is suffering from the same hardships as my two friends, yet on a massive scale: illness and job loss,” she continued. “So the dedication of this song hopefully embraces everyone.”

“But even so. The last thing you want to say to someone who’s suffering is, “Don’t worry! God is going to reverse all of this!” Well, OK, that may be true. But it somehow never cures the actual pain does it? Truth isn’t necessarily an analgesic. Redemption may be in the future; but the pain is here now.”

“So I offer this song up for all of us, humbly, to believe that God will redeem every part of this pandemic – all the suffering, all the loss. And as always my dear friend Ben Shive collaborated with me as songwriter and producer,” Melanie concluded.

Melanie Penn is a pop songwriter that writes about faith and world issues. She was born in Washington and raised in Virginia where she began classical vocal training at a young age. She then moved to New York where she joined the national Broadway touring company with “Grease,” starring Frankie Avalon. After her career in theater, she honed in on her songwriting. She started collaborating with producer Ben Shive and has released four albums, with a pop album due in 2020 becoming her fifth project.
Related ItemsMelanie Penn
Jacklyn