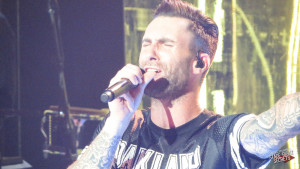 Rozzi Crane started off the night.  You wouldn’t think that voice would come out of such a petite young woman. She can easily be the next Christina Aguilera. She even covered Barracuda which gained major cool points in my eyes.

Magic! I fell in love with after exactly 2 minutes and 32 seconds. Their reggae infused music with the catchiness of pop radio makes them a force to be reckoned with.  You most likely have heard their single “Rude” on the radio, if you do like that song then definitely listen to their album.  Each of their songs can easily be a top 40 hit, I also admire the fact that the radio is embracing Reggae music. 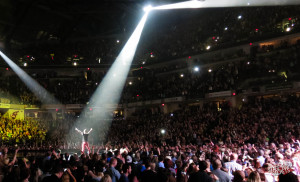 Maroon 5 came on stage and every single person stood, including the girl with a cast that was in a wheel chair.  I attended this show with my mother, who was amazed at how many songs everyone forgets M5 has made.  Their lights, set up, and production value was off the charts.  The stage had moving, rotating, and sliding lights, mirrors, and a catwalk that lit up in the shape of an arrow. James’ guitar solos were out of this world!

Adam of course has the charisma and moves to be the front man and really sell the music. Not to mention when it came time for an acoustic rendition of She Will Be Loved, Adam and James had the entire audience put away the cell phones for the song.  Adam even yelled at some people who started to bring them back out. The band does bring up a great point of experiencing concerts (and life for that matter) rather than watching it on cell phone screens or sending an Instagram. I promise there will be hundreds of YouTube videos from your concert that you can watch, so why not put away the cell phone for at least one song? There will be professional pictures, instead of your blurry iPhone images you’ll wish you actually experienced instead.  I didn’t realize how hard it was to get the entire crowd to do, but they managed.

Maroon 5 have been around for some time, so their older songs they reworked melodies, harmonies, and beats for.  It must have taken quite a bit reconstruction but each re-imagined song sounded just as great as the original.  The only negative part of the night was that it had to end and I had to go brave the snow.  Definitely pick up tickets for their show, it’s unlike any other concert I’ve seen and one of the best musically, visually, and interactively.