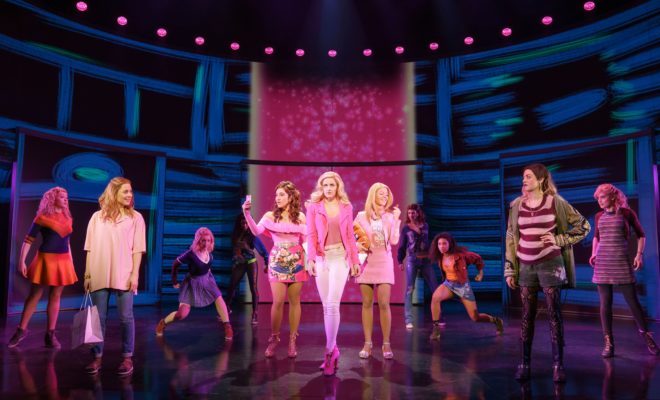 Exclusive Interview with Krystina Alabado of Mean Girls on Broadway

Do we even need to tell you what Mean Girls is? No, ok good. Well, your cult classic favorite movie has been made into a Broadway smash hit that just celebrated it’s one year anniversary. To celebrate we got to chat with the lovely Krystina Alabado who plays Gretchen Wieners. Say it with us now, SO FETCH!

What is the process like being a replacement in a Broadway show?

Being a replacement is very different from anything else in the theatre business and it’s a unique process every time you do it. This time, I had three weeks to learn Gretchen before I was doing it full time on stage for an audience! I worked every day with Casey Hushion our associate director, the stage managers, and dance captains to learn and create my own version of the character. We spent two weeks learning and crafting my take on the role which then led into a “put-in” rehearsal, which is where I get to run the full show with the cast, sets, and lighting before I perform for the first time in front of an audience. Mean Girls went above and beyond to make me feel comfortable, ready and valued coming into an established show and company. They welcomed me with open arms and I honestly could not have asked for a better experience.

The level of fandom for Mean Girls is insane! Have you had any crazy fan experiences so far?

It has been SO much fun! I love how much Mean Girls means to so many people. I was a huge fan of the film in high school (I literally watched it probably a hundred times) so it is fun to interact with audience members and fans my age who loved it as much as me growing up. We also have the most wonderful, sweet younger fans who just love the show and really connect to it since they are going through some of the same situations right now in school.

I get letters/messages and speak to kids at the stage door about how they sometimes feel like Gretchen does in “What’s Wrong With Me” or that they are no longer friends with their “Regina” at school because she was mean to a friend, etc. I hear that our show helps them get through all that complicated stuff or school in general – and makes them feel strong. One junior high school girl just wrote to me that “we girls need to stick together, and that is what I learned from seeing Mean Girls.” That means so much to me and everyone at the show.

What are your favorite qualities about Gretchen?

I love how vulnerable Gretchen is. She honestly reminds me a little of myself in high school and how we can all sometimes feel in life. Questioning if we are enough or how people perceive us. I think that is why so many people connect to her because we have all been there at some point. And you can see glimpses of her almost “getting it” in the show! I also love how fun and hyper she is, again, a piece of me that is fun to bring out on stage.

How do you typically handle a two-show day?

No matter how long you do this as a career, two-show days are never easy! Ha. For me though, it’s all about REST. Usually, on a two-show day, I sleep in a little to really get myself as rested as possible. Then I get up and start my morning with a large coffee and stretching/yoga to wake up my body and mind for the day. Between shows, I make sure I eat well and again, rest rest rest.

If you could play any other character in the show for just one day, who would it be?

Damian, for sure! He was always my fave in the film and I am, as we all are, obsessed with Grey’s performance. He really does make me laugh every single day with what he does on that stage. And, he is so loving and fun. I think being Damian for a day on stage would be the best! And, honestly, I want to ride that jazzy! LOL

What are your dressing room essentials?

Snacks! Tea, vitamins, music, and snacks!! Me and Kate Rockwell are always fully stocked with snacks to keep us going!

Who would be your dream people to sit with?

What advice would you give to your high school self?

You are enough! It is hard to hear that when you’re younger, but I just wanted to be good enough, nice enough, loved, accepted and I always felt like I was fighting for that in high school. I moved in the middle of high school, so that made it very difficult for me. I faced bullying and mean students. And, though I was doubtful, I always stayed true to myself. It all worked out in the end, but I would tell my high school self that she is awesome just the way she is!

How does being on Broadway compare to being in Off-Broadway shows and national tours?

I have been doing this now for 11 years (crazy!). And, I’ve done all three – Broadway, off-Broadway and touring – there are things I love about all of them. The best part about Broadway is, I think, that it feels like BROADWAY!!! Does that make sense? Every time I do a Broadway show, it immediately takes me back to my 15-year-old self, listening to cast albums and dreaming that one day I could do that … one day I could say I was on Broadway. Truly, it never gets old and always feels so special. My younger self would pass out if she knew she would be on Broadway not one, but three times!

I’ve also spent the last three years doing a lot of off-Broadway work and that (in itself) is special and dreamy. My off-Broadway work has included new works, roles, and characters that I’ve helped create from the ground up. It’s been some of my favorite work that I’ve ever done. Being in that creative process with artistic, challenging off-Broadway shows and in workshops or labs is inspiring and incredibly creatively stimulating.

And lastly for fun, what are your favorite NYC hot spots?

A big hobby of mine is WINE, so my favorite spots are some of my favorite places to drink wine. Corkbuzz is probably my favorite wine bar in the city. They do blind tastings and have the BEST ricotta toast you’ve ever had!

You can’t sit with the plastics but you can sit in the audience, get your tickets HERE