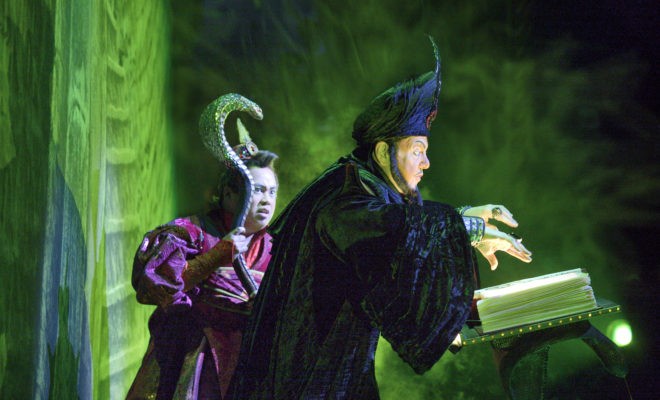 Jonathan Freeman has been playing the role of Jafar in Disney’s Aladdin for over 30 years! He is the original voice actor in the 1992 animated version you definitely had on VHS and currently live in the flesh on Broadway eight times a week!

You’ve been in the role of Jafar on Broadway for five years now and started voicing the character over twenty-five years ago. How do you keep it fresh and new every night?
JF: I try (as much as possible) to remind myself what the story really is that we’re trying to tell. As time passes it often becomes more difficult to stay focused, so I try to make myself go deeper, instead of bigger. It helps to remind myself that there is someone in the audience who has never seen a Broadway show before, or, may have had to save the money to make it a special experience. It’s unkind to shortchange a visitor because I’m in a crappy mood…and if that’s really the case, I take a day off. I have a wonderful standby AND a terrific understudy.

You have also starred in other Disney on Broadway productions like ​Beauty and the Beast​, Mary Poppins​ and ​The Little Mermaid​. If you could play any other Disney character on Broadway, who would it be?
JF: I’d like to play the Caterpillar, in Alice In Wonderland. I think that would be a blast to bring to life!

What makes you keep coming back to work with Disney?
JF: Well for one thing…they ask me! It’s nice to be asked. I feel valued. There is also a lovely sense of security knowing that Disney will do everything in their power to promote their productions and keep them running.

What was your favorite Disney film growing up?
JF: Oh no, don’t make me choose! I definitely did N O T have a favorite film…but for sure the films with the strongest, most outlandish, over the top villains gave me the greatest pleasure…and still do. Without a good villain, you don’t have a good story. They are the gasoline that fuel the greatest stories ever told…and please don’t ever forget that.

What are your memories of acclaimed songwriter Howard Ashman?
JF: His insightful notes, given by phone from his hospital bed to Alan Menken, to pass on to me in a studio while we were recording a demo of the last song Howard would write called “Humiliate the Boy”.

After watching the documentary ​Waking Sleeping Beauty,​ the time ​Aladdin​ was being made was a very unique time in Disney history. What was your relationship like with Jeffrey Katzenberg during the production of ​Aladdin​?
JF: Well, he was my employer. I only really remember him from a few of the more important recording sessions, press junkets, and then at the celebratory parties for the various openings and subsequent festivities. People kept saying that we were, “in The New Golden Age of Disney”, so, I suspect that made him happy. He was very kind to me. I think he felt they made the right choice in hiring me.

With this upcoming live-action adaptation of ​Aladdin​, what do you hope new generations take away from the story?
JF: Well first and foremost, I hope it gives them the same amount of pleasure that the 92′ animated feature gave and frankly is STILL giving to people. It really is one of the greatest stories ever told.

Family reunion! Congrats to everyone involved in making the magic happen at ALADDIN.

How do you tackle two show days?
JF: Rest as much as possible. Try to eat well. Go to PT. Have an equal amount of optimism and pessimism on the day…I think it’s healthy.

What are some of your favorite NYC hotspots?
JF: Currently: Bar Centrale, The Box, The Veselka, PDT, to name just a few. I’ve lived in NY since 1972, so many of my favorite places are long gone…but that IS the nature of most “favorite hotspots”…they become mirages.

You don’t need to use one of your three wishes, click HERE to get your tickets to see Aladdin on Broadway.