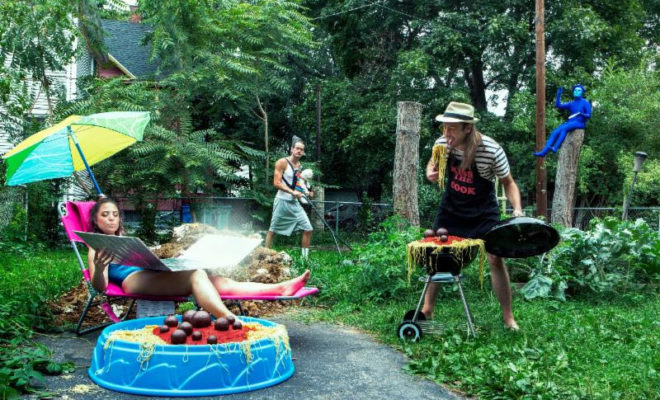 Rochester-based band, KOPPS, debuted the wildly eccentric official video for their song “Baby, I’m Dead Inside” and what better way to celebrate it by having the band take over our Spotify and create the masterpiece that is ‘Fuk W. KOPPS!’?
The concept of the video was born during a conversation that KOPPS had with each other about phases that they went through as kids, and how some might have considered them to be “Goth”. The zinger here is that the dad is the “angsty teen” while the band portray the “boring, plain-Jane” family members and it’s worth noting that the band’s own dads make cameos in the video.
“Our IN HOUSE director and friend, Joseph Morinelli of Joywave fame shot and art directed the video, as he has for several of our videos. We are proud to say that beyond actor Eric Cover, the lead “goth dad,” all of the other goth dads in the video are our actual dads. Really talented bunch. They are musicians IRL, as you can tell by their untouchable stage presence in the goth dad garage band scene.” – KOPPS
KOPPS on Social Media
Official Site
Facebook
Twitter
Instagram
YouTube
Related Itemskopps
Jacklyn