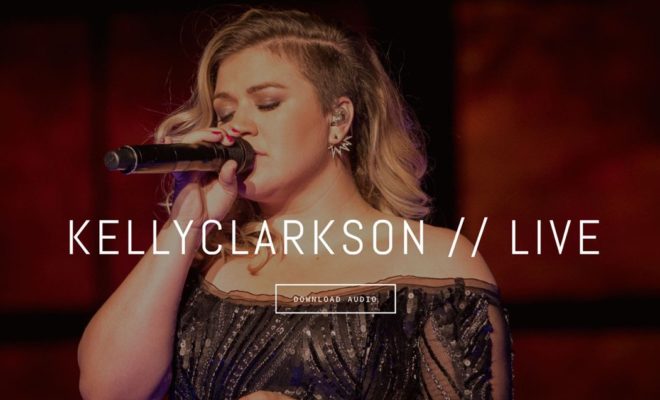 After releasing her latest album under Sony Music’s RCA Records label, Season 1 American Idol winner Kelly Clarkson had two choices: either continue on with RCA, or leave the label, which was a choice she was given since 2015 Piece By Piece was the last album to be released under her current contract.

After a week of performances on Facebook Live, the 34-year-old mother of two announced her choice on social media this past Friday, June 24. It turns out the singer has signed a long-term worldwide deal with Warner Music Group’s Atlantic Records.
In a press release announcing the new contract, Clarkson explained her decision by stating her rocky partnership with RCA was more of an “arranged marriage” after winning American Idol. Don’t get her wrong, though! Clarkson is still thankful for all these years spent with RCA, which resulted in seven studio albums, three No. 1 singles and three Grammy Awards. But now, she is ready for new adventures and for more creative freedom! And this will start an album for 2017 that will draw on soul music and R&B for inspiration.

“What’s cool about Atlantic Records is that they love every part of my personality, as far as all the colors of my voice,” Clarkson told her fans. “I love the country side of me, and I love the Broadway side of me, and I love the pop side of me, and the soulful side of me—and they are down to really make whatever record I’m into, which is real rare. So, I’m super excited about it. […] It was the first time in my career—15 years later, starting in this industry—that I actually got to pick who I wanted to work with. I was very excited to see who would be excited to work with me. And I’m going to tell you right now, Atlantic Records was just overwhelming inspired by me and excited to work with me…Everybody was so excited and won me over. I’m so excited because they want to make the album I’ve been dying to make since I was a kid, and since I was on Idol. Everybody’s been asking me to make a soulful record for years, and while we’ve always had soulful influences on my records, we’ve never actually made a soulful record, so, that is what Atlantic Records and I are about to do,” Clarkson explained. “We have already started creating a record that I have been wanting to make since I was a little girl, and a record that fans have been asking me to make for years. Here’s to the future!”

To celebrate the new deal, Clarkson launched a very new website KellyClarksonLive, where she will post 4 new covers, available to download for free, every last Friday of the month. She kicked it off with Coldplay’s “Fix You,” Radiohead’s “Creep,” Etta James’s “I’d Rather Go Blind,” and India Arie’s “Ready For Love.” Head to the website to download them now!