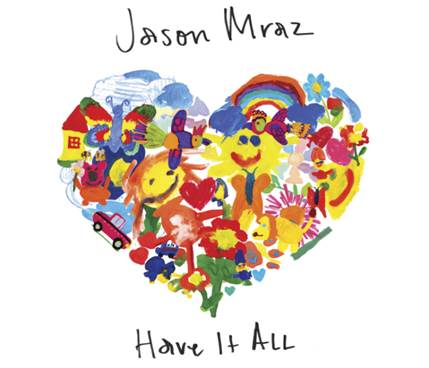 Jason Mraz Returns With “Have It All”

‘It’s a great new music Friday with a new Jason Mraz single. “Have It All” was written by Mraz with David Hodges (Christina Perri, Kelly Clarkson) and JKash (Maroon 5, Charlie Puth, Meghan Trainor) in collaboration with his friends in Raining Jane (Mona Tavakoli, Chaska Potter, Mai Bloomfield, and Becky Gebhardt), and produced by Andrew Wells. The track was originally conceived after Mraz received and translated a blessing from a Buddhist monk during a moving visit to Myanmar in 2012.  However, current events compelled him to bring “Have It All” fully to life at last.

“The world had changed a lot since 2012,” Mraz says. “More people are marching for their freedoms and equality; to be seen and heard. Activism is back in style. I wrote a lot of frustrated, angry, even sad songs between then and now, but nothing I wanted to come forward with; nothing I wanted to sing. ‘Have It All’ stood out as a song with a hopeful message to help me heal and move forward; a song with a message of generosity – the antithesis of despondency; a song bestowed to me by translating a message from a monk. It’s a blessing disguised as a rap song and it’s meant to be paid-forward and shared.”

The song also comes with a music video. Directed by longtime collaborator Darren Doane (“I’m Yours,” “Make It Mine,” “Lucky”), the visual captures the song’s bright spirit with a stroll through Mraz’s hometown of Richmond, VA, joined by students from the School of the Performing Arts in the Richmond Community (SPARC), as well as students from the Richmond area Turnaround Arts schools, plus actors Katie Grober (Waitress) and Greg Grunberg (Alias, Heroes).