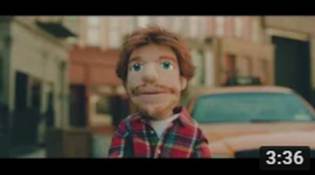 Ed Sheeran has today introduced the official video for “Happier” from Ed’s record-breaking, 14 million-selling third studio album ‘÷.’ The brilliant visual was directed by Emil Nava (Eminem, Rihanna), who has worked on many of Ed’s official videos since the start of his career.

Shot to the backdrop of New York and following the song’s emotive narrative, we see Ed’s lookalike puppet, which made its debut in the official video for “Sing”, return for yet another show-stealing performance in the accompanying video. To date, “Happier” has received over 400 million streams and has landed 8 x Platinum/5 x Gold certifications across the globe.

Ed Currently on a world stadium tour, Ed will return to the US later this fall to kick off his 2018 North American Stadium Tour on August 18th in Pasadena, CA at the Rose Bowl Stadium. The tour is set to end on November 10th in Atlanta, GA at the Mercedes-Benz Stadium. For more information and ticket purchases please visit http://www.edsheeran.com/tour.

← Previous Story Jason Mraz Returns With “Have It All”
Next Story → Sophia Black and Kyle Bring “Real Shit” To Life!