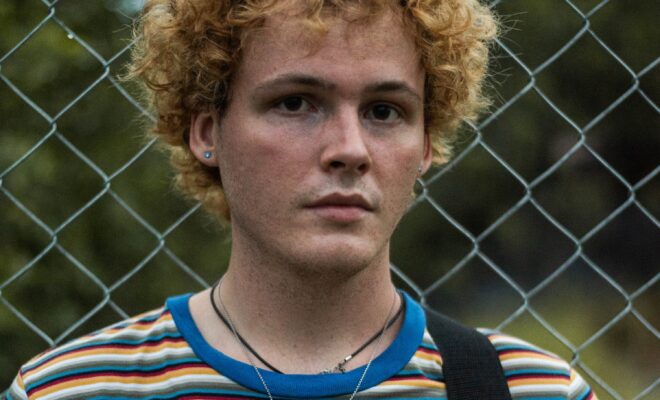 We caught up with Florida-based singer/songwriter/producer Ben Chandler about his new single and video for “Stoned.”

The 22 year-old multi-faceted musician just released his new single “Stoned”. The single follows his most recent release “Addicted 2 U,” his sultry release – “Strawberry Candy” and debut single “Red Line” which arrived earlier this month alongside an official video.

Chandler is gearing up to release his highly anticipated Transitions EP in early 2021.

How involved in your visuals are you?

I’m pretty involved! For my last release, I directed the whole thing with this guy named Savy. I shot this idea to him and my girlfriend and then I read it through my visual guy Sam and after that, we just went with it. It was just about putting the people in the right place. From “Strawberry Candy,” I had written about half of the treatment. I knew what I wanted a year prior, so it was pretty easy to just write down my main ideas for it. The people I work with understand my vision and we’re totally on the same page so we always have a good time.

Do visuals come to you when you’re creating the music, or is it more of an afterthought for you?

Honestly, it’s a little bit of both. Like the other day, I made a song and I instantly could see that cool animated lyric video for the song while I was creating. Once I really get the feel of the song, I start thinking about the visuals and I kind of work on it till the end.

Everything’s gotten complicated since the COVID-19 outbreak. Do you think the quarantine has helped you or hurt you creatively?

I’ve always been a homebody so I wouldn’t say it’s hurt me. The only negative thing has been the amount of overthinking I’ve been doing. But overall, it’s been great! I’ve been doing a lot of Zoom sessions with a lot of really cool producers and meeting a lot of dope people. At the end of the day, it hasn’t changed much for me, I just stopped going out to be an idiot in public.

How do you overcome a creative block during those sessions?

It’s a great question because I’ve been struggling with this a lot lately. Thankfully, I’ve got great people surrounding me and they’re always giving me challenges and tips and tricks. It’s hard some days but some other days, I get in the room and I know I’m supposed to be there, it will come to me quickly. Pharrell said something about writer’s block not being a thing. He said that if you get that writer’s block, it’s just that you’re not in the right room, at the right time. That’s kind of my mentality. If I don’t feel it, I walk away.

Your growth this past year has been crazy. You now have over 140,000 monthly listeners on Spotify. How do you feel about that?

Yeah, it’s been crazy. A year ago today, I barely had 1,000 followers because that’s when I really started pushing myself to put songs out there. I thought it was going to take forever, but every time I dropped a song, the numbers went up. I’ve always been a self-conscious person, I never enjoyed hearing what other people had to say about me. I don’t usually let it get to me when someone’s harsh but depending on who it is, it’s still going to hurt, you know? But I’m happy to say I’ve grown a lot from that. I was terrified to release my stuff before, but I pushed through. There was even this one time where I attended a show a friend of mine Dom (Dominic Fike) was doing in Florida, and after that show, I tweeted “New Song Next Week!” I had no idea what I was going to release, but it was going to happen. Releasing stuff used to be a big obstacle so I’m glad I did that.

The warmth of sunshine, the taste of candy, and the tingles of a first kiss swirl through the music of Ben Chandler. Lithe guitar, breezy beats, and fluttering vocals give form to feelings as he spins alternative pop through a nostalgic psychedelic lens.

Raised in Pittsburgh, PA, Ben Chandler recognized the power of music as a kid. Starting at just 12-years-old Ben Chandler creates music that blends the musicality of his classic rock idols like The Beatles, The Grateful Dead and Jimi Hendrix with the DIY ethos of Tyler The Creator and Odd Future.

Upon relocating to Naples, FL as a teenager, Ben immediately entrenched himself in the local music scene. He teamed up with his close friend Dominic Fike for “This Thing Called Love” in 2016 and uploaded a steady stream of music that eventually paved the way for his independent Ben Chandler EP and the 2020 Sweet Dreams, Sweet Heart EP—written and recorded during the first three weeks of the Global Pandemic lockdown.