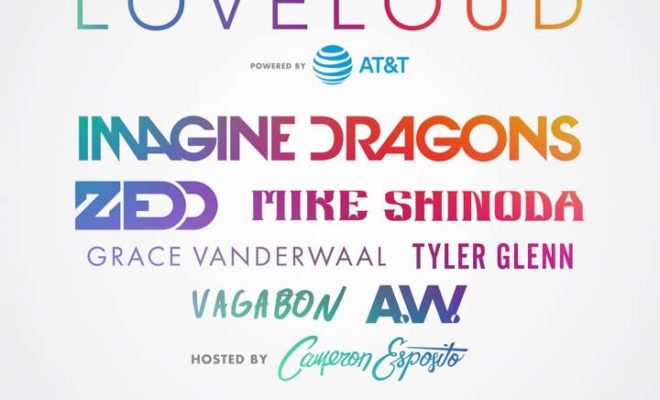 Dan Reynolds, lead singer of Imagine Dragons today announced the second annual LOVELOUD Festival designed to ignite the vital conversation about what it means to unconditionally love, understand, accept, and support LGBTQ+ youth in our communities. The 2018 LOVELOUD Festival will be powered by AT&T.
LGBTQ+ teen suicide, often caused by a lack of communication or an absence of acceptance, is one of the most troubling issues in the community. The numbers are staggering:
“We at LOVELOUD are determined to help create a more loving and accepting environment for them, while also hoping to raise more than $1 million dollars for local and national LGBTQ+ charities,” said founder and Imagine Dragons front-man Dan Reynolds. “We look forward to a day dedicated to celebrating their diversity while listening to great music and inspiring speakers.”
LOVELOUD Festival will take place Saturday, July 28, 2018 in Salt Lake City, UT at the Eccles Stadium and feature performances by Grammy® Award-winning artists Imagine Dragons, Zedd and Linkin Park’s Mike Shinoda along with Grace Vanderwaal, Neon Trees’ Tyler Glenn and A.W. Stand-up comedian, actor and writer Cameron Esposito will also perform and emcee the day’s festivities. More performers and speakers will be announced in the coming weeks.
LOVELOUD tickets will go on sale Friday, April 6 at 10AM MST. Festival goers can purchase tickets HERE. Doors open for the LOVELOUD Festival at 2pm and the music begins at 3:30pm. The festival will feature food, beverages and a number of other activities for fans of all ages and interests. The LOVELOUD Foundation will donate proceeds from this year’s event to benefit LGBTQ+ organizations including Encircle, the Tegan and Sara Foundation and the Trevor Project.
“LOVELOUD’s inspiring goal is to raise $1 million dollars for LGBTQ+ organizations in one day, and we know that this amazing program of music and speakers will entertain, educate and inspire everyone who comes out in support on July 28th,” said Tegan and Sara. “We started the Tegan and Sara Foundation to bring resources and attention to issues affecting the LGBTQ community, and we are proud to work with the LOVELOUD team to amplify their urgent message of acceptance and unconditional love.”
As part of this quest, Dan Reynold’s created a documentary centered around LOVELOUD, called Believer. The film received runner up for the “Festival Favorite Award” at Sundance Film Festival 2018 and will premiere on HBO in June.
Related Itemsimagine dragonsloveloud
Jacklyn