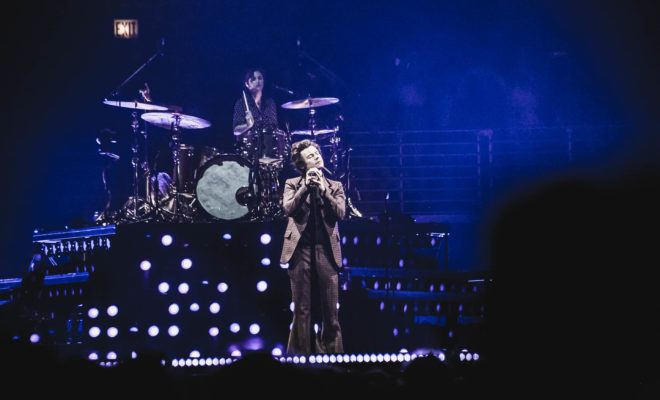 Full photo gallery to come on our Facebook here and our July Summer Issue here!

On June 30th, 2018, Chicago’s United Center hosted Harry Styles: Live On Tour. Some eagerly awaiting fans, who had spent over thirty hours outside, hoped for the best spot to see their favorite musician. And let me tell you, as his tour nears the end of a 5-month worldwide run, Harry Styles has never been better. Coming into this concert, I knew of him and One Direction, but leaving the show, I left a dedicated fan. One of my favorite aspects of his concert was the fact that every age range, race, and genders were in attendance. Their dedication knew no bounds, with long waiting hours, up to over a day in some cases, in an over 100 degree heat. Fans were welcoming and kind to each other, which made it even more interesting. Everyone I saw that come to the concert by themselves ended up befriending someone in the blocks long line.

Once inside, it seemed like every seat was filled. Even though the venue had inconsistent rules on posters/flags, every single section donned a pride flag and mini posters (even after security tried taking them away fans ended up snatching their posters and flags back). Harry has always been outspoken about being pro-LGBTQ+, ending gun violence, Black Lives Matter, and feminism (which shows with his female band members). The concert attendees held signs about all of these causes close to him. Fans could even purchase a refillable water bottle through Reverb’s Rock’n’Refill program with the money going to a local charity that Harry hand picks in each city. With all of his outspoken support for love and equality, all of Harry’s merchandise donned the mantra “Treat People with Kindness”. I even witnessed a fan buy the shirt for a concession stand worker, who was over the moon of this stranger’s generosity. If those causes weren’t enough, throughout this tour, Harry has stopped to meet Make A Wish children, some of which have shared their stories on social media. A global sensation that is politically and socially active and actually caring about others is a refreshing sight. I’m glad to report his fans have brought his vision and ideals to life.

Right before his set began, security guards were back again trying to take away fans’ flags and certain posters, fans in turn held up their pride flags and the crowd cheered them on. While the crowd was gearing up for the show, the screen played an animated video of Harry playing with a rubix cube. This rubix cube also came up in his merchandise which fans speculated the meaning behind. One viral theory is that the left hand looks like Harry’s current hand with the ruby ring and rose, the right hand seems to be an older hand before he got an anchor tattoo there which wasn’t present on the screen. The fan went on to speculate that it represents Harry trying to fit together his old stuff with his new era. It seemed as though the production and every aspect of the concert experience held minute details only a trained Styles fan would notice.

Once the arena went dark, the fans erupted in cheering, applause, crying, and excitement. The screens rose above to reveal the silhouette of Harry and the crowd’s roars even became louder, which I didn’t think was humanly possible. The stage production was a sight to see and almost every seat in the venue gave a pristine view of the younger version of Mick Jagger. I have to hand it to Harry, he never forgot about the fans in every single section, including the ones in the obstructed viewing running over to them for a moment during every single song. His voice live sounded even better than the recordings I’ve heard on the radio. His set included all of his songs off his debut album along with unreleased songs and covers. Prior to the concert, I had no idea Harry wrote music let alone for another artist like Ariana Grande. When he covered Ariana Grande’s ‘Just A Little Bit Of Your Heart’, it honestly sounded better than the original Grande recorded. Staying true to his beginnings he even threw in a couple One Direction jams to which the crowd screamed in unison and made my heart skip a beat while I went back in time to the 1D mania days.

At the beginning of the day I didn’t know much about Styles, flash forward to post-concert having the need to purchase his album and learn more about his activism. After only a ninety minute show I have become a fan, that should speak to his impressive live show. It truly is an experience one of which should be enjoyed by Harry fans and general music fans alike. I can promise you if you go into a show of his not knowing much, you will be leaving a fan.