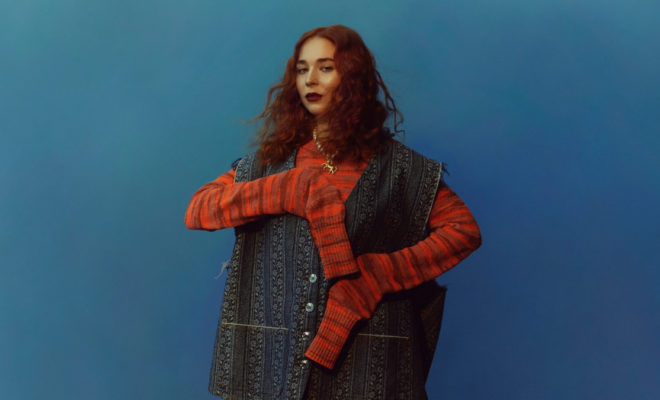 Stage Right Secrets spoke with Grant to talk all about “Words,” getting started in the music industry, and what life has been like in quarantine. Read our exclusive Q&A, below.

Congrats on your “Words” release. Walk us through the creative process behind the track.
Melody and words came quite easily on this one, sort of poured out in a way that rarely happens. I tried a bunch of different directions for the production but decided on something that felt true to the core feeling. A slow build that never truly resolves. I tried to attain the same effect by playing with holding back my voice, never giving it full power. I’m usually quite dramatic, but this song is more about reading in between the lines than wearing them on my sleeve.
Same goes for the video, it focuses on the mundane so you need to fill in the blanks all on your own.
Your music video is so simplistically beautiful and I love that you included your cat. How involved in the concept were you?
Very! I loved working with Lina, we maintained a dialogue all through preparations and she truly invited me to be a part of the making of this video. It’s important to me that the person directing knows exactly what the song means to me and what fragments of visuals I’ve had in mind.
[embedyt] https://www.youtube.com/watch?v=yXe46BnQyiE[/embedyt]
Do visuals play a role in your music?
It does. I like the idea of visualizing each song, creating an atmosphere or a place where it plays out. Sometimes it’s just colors or gestures, sometimes it’s a whole city. I write autobiographically but visually I’ll end up in a place between reality and imagination.
Taking it back, was there a specific moment that made you realize that you wanted to be an artist?
Yes! My first time ever on stage when I was 9. I was very shy as a child, but having a room full of people go quiet while I knew exactly what to say was so powerful and addictive from the start. On stage I felt a real sense of belonging and joy that I hadn’t experienced before and that haven’t found anywhere else since.
Growing up on a farm near Stockholm, what was your introduction to music? What was the music scene like?
We had a local after-school music program that meant a lot to me, it was very inclusive and focused on having fun. I also had a few teachers in school that were very encouraging but the scene in itself wasn’t very inspiring.
My introduction to music came through my parents being avid listeners and a friend of my mother who’s a jazz singer, she’s been very important to me!
What record made you fall in love with music?
Tough one! À L’Olympia with Edith Piaf if I want to sound cool but it was actually Bigger, Better, Faster, More! by 4 non blondes.
[embedyt] https://www.youtube.com/watch?v=Bnn96hbTu6g[/embedyt]
How did you get into songwriting?
I wanted to be an artist but I didn’t feel comfortable being just a singer. As a child I wrote a lot and I made a few little songs over the years but I didn’t really have the confidence. At the end of highschool there was no questioning wanting to do this for the rest of my life and I didn’t want to sing anybody else’s words, so I just had to get to it!
Since most of the country is or was in quarantine, what did you do to pass the time? (New skills, baking, binging shows, etc.)
I’ve binged so many shows and movies. I’ve seen all seasons of X-files.
New habits have been made, good and bad. I’ve also taken an online Contemporary Arts course and I’ve started to ”snusa” (use swedish nicotine pouches) quite a lot.
Did you find it easier or harder to be creative while stuck at home?
Actually a lot easier. Boredom is quite devastating but it also allows you to get inspired.
What else can fans expect from you this year?
There’s an EP coming! I’m super excited!!! I’ve made my favorite music videos to date and the album is almost done as well! A lot to look forward to, and worry about. I hope you’ll like it!
You have a new EP in the works. Taking the last year to work on new material, what inspired you?
Quite blatantly my relationship. But it’s my first serious, long term relationship and I just find it an endless source of inspiration. There’s so much I haven’t gotten my head around yet that I’ve been needing to write about. It’s the same boy I wrote about in “Catcher In The Rye” for and things have just gotten more interesting from there.
Have your influences or taste in music evolved over time?
Absolutely! I used to listen to the same albums over and over again but these past few years I’ve been discovering a lot. I expanded my horizon most when I started working in a nightclub. I keep my ears open and these days I feel sure enough about my taste so that I can shape new influences as I want to. I’d like to be ever expanding.
What inspires you or helps you get out of a creative block?
Long walks, silence and reading. Taking time off is important to me. I can’t seem to force it.
If you could go back and tell your younger self just starting out one thing, what would it be?
Dancing. I do a lot of that these days, but it would have been cool to actually be good at it.
Related Itemsgrant
Jacklyn