The Glamour Kills Tour 2015 was announced today, and it includes some of our friends, Against The Current! Set It Off and ATC are the two main bands of the tour, and it will also include As It Is and Roam. The tour kicks off at the end of February and goes until early April. Who’s excited?! 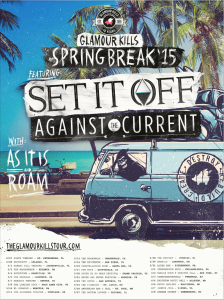