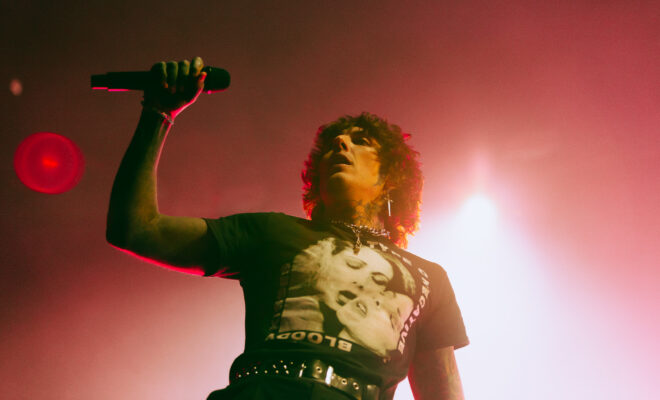 Bring Me the Horizon does it all on US Tour

Genre-bending bands are far from dead, and Bring Me the Horizon is showing that every second of their current US Tour.

Since their hit single “Can You Feel My Heart” became a viral sensation on TikTok, Bring Me the Horizon, already a massive band in the alternative scene, has surpassed the scene altogether. A band that has been breaking sonic boundaries for years, they continue to push themselves with every release, and their performances continue to expand leaps and bounds, as well.

Bring Me has been performing in Chicago for well over a decade, but any avid concertgoer can see that there is a difference in their performance now from previous years. This tour specifically, their performance has become something monumental, something heightened, something appealing to more than just one’s sense of sound.

With the crowd amped up from the jump, the band let themselves be introduced by a 3D rendered woman on screen, her skin glossy and smooth, reminiscent of a mannequin. Surrounded by text designed to look like computer code, speaking in a monotone voice similar to that of Siri or Cortana, she let the crowd know the band would be out shortly, and they went wild.

The lights went black, the smoke poured out on the stage, and the band made their way out, going right into the intro of “Can You Feel My Heart” – the droning, synthetic notes starting, the lights pulsing, the crowd deafening. With the stage entirely made of LED screens, the band is bathed in light, neon hearts growing and glowing behind them and around them, beating and shifting in time with the music.

The vivid, incredible stage production, in collaboration with the band’s performance abilities, turned the concert from just a concert into an experience for their audience.

During the song “Teardrops,” a nu-metal, electronic type track that is very strongly reminiscent of Linkin Park’s Hybrid Theory sound, the band is drenched in scratchy/ rigid-textured streaks across the screen in shades of black and gray, shuddering and scratching and leaping, the same way “Can You Feel My Heart’s” production did, but in a “sharper” more cutting way. This is not exclusive to “Teardrops,” or “Can You Feel My Heart,” however. The band knows this is a necessity for every track, and it shows.

Vocalist Oliver Sykes is so charismatic as he strides across the stage in his wide-legged black trousers and his Type O Negative tee-shirt. He is casual, cool, and collected, but has full control of the crowd from start to finish of the performance. This shines through so strongly, especially near the end of the performance, when a fan is injured and Sykes calls for a pause to the set. Somehow, an arena of ten thousand is suddenly quiet enough to hear a pin drop, and remains that way until Sykes makes it clear again that it is safe to continue the performance.

Jordan Fish, the band’s resident jack-of-all-instruments, remains behind his drum pad and keyboard set-up, set on a riser fully made of light, while he cranks out the synthetic, electronic notes and breakdowns that Bring Me the Horizon has been so well known for in recent years. Fish’s addition to the band with the release of Sempiternal most definitely gave them a leg up on the rest of the metalcore scene, where they began paving the way for the modern, tech-embracing sound that we commonly hear in the genre today. His live performance is glistening, as his contributions to each track are the foundation of Bring Me’s current sound. Fans lose their mind over Fish’s addition to each track in a live setting, especially when they get into the ode to COVID itself, “Parasite Eve,” and then take fans back in time with an older classic, “Shadow Moses.”

The dynamic range in sound this band showcases is astronomical, and every member is given screams and shouts and hoots and hollers from fans all night. Founding members Lee Malia and Matt Kean hold their own as they carry the instrumentals throughout the night, while Matt Nichols and his drums juxtaposed against Fish’s keys and synth keep the band on-pace through the night, and give some deeper range to each song.

The band surely knows how to keep their fans occupied, as well, because they have no issue with pulling out the stops and playing a little bit of everything. “Diamonds Aren’t Forever,” off of 2008’s Suicide Season, gets thrown into the mix (with a guest appearance from Knocked Loose vocalist Bryan Garris), while a very soothing rendition of 2014’s “Drown,” follows just a few short songs later.

Bring Me the Horizon can shift their sound into any genre, any aesthetic, any style, and it will succeed, because they do not just play, they perform.