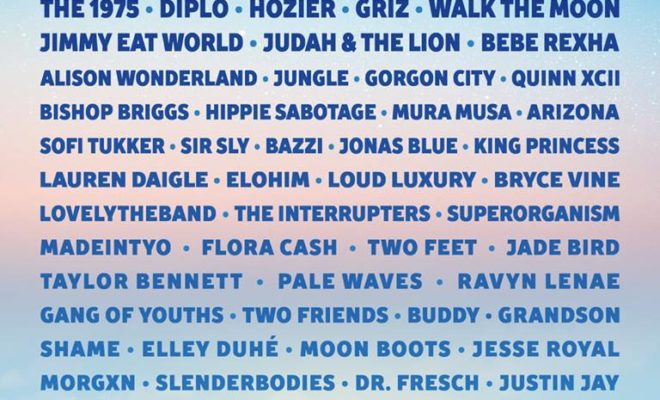 Hangout Festival brings together all genres and all levels of artists from around the globe. Though this year’s headliners are BEYOND incredible, here’s five performers that are sure to be headlining in the future.

lovelytheband catapulted onto the soundwaves with radio hits “broken” and “these are my friends” last summer. Their music was inescapable and with their fresh indie-pop anthems it was impossible to be angry at the entrapment. Last year saw lovelytheband hopping into the festival circuit and we have no inclination they’ll be leaving anytime soon.

Manchester, England’s four-piece indie pop band Pale Waves have spent the last year and a half securing their place in the alternative world. Since their first trip to the US in March 2017, providing support for The 1975, the band has continued building a dedicated following. The release of their debut LP My Mind Makes Noises in 2018 created quite a commotion and polarized listeners pushing Pale Waves further into view of music fans old and new.

Mikaela Straus, known by her stage name King Princess, is a twenty-year-old phenom from New York City. The fact that King Princess grew up in a record studio, her father is an engineer and the owner of Brooklyn’s Mission Sound, shows in the polished sound on her EP Make My Bed. King Princess is endorsed by Mark Ronson, by Harry Styles, and certainly by us.

With his first single, “Go F*ck Yourself,” going viral and reaching #36 on Billboard’s Hot Rock Songs chart and his second, “I Feel Like I’m Drowning,” hitting #1 on the Alternative Songs chart, Two Feet tunneled into your ears and got stuck in your head. After a tumultuous 2018, we are excited to see Bill Dess back on his two feet and can’t wait to see him tear up the stage at Hangout.

Jordan Edward Benjamin, known professionally as grandson, may have three first names but the only thing he’s killing is the charts. The Canadian-American artist has been releasing music under his pseudonym since 2016 and has accrued millions of streams while doing so. Since signing to Fueled by Ramen last spring, grandson has released to poignant EPs and doesn’t show any sign of slowing down.