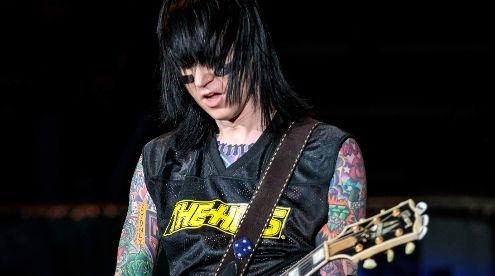 EXCLUSIVE: The Hots Talk “What It Takes”

The Hots are a rocking Aussie married couple, Foxie and Ronnie, who are taking over America. Their latest single “What It Takes” is the new theme song for the American Women’s Football League. Ronnie got to chat with us on it all!

What can you tell us about your new single “What It Takes”?
What It Takes is an anthem about women’s empowerment, overcoming adversity and striving to succeed in the shadow of the old sentiment “You’re pretty good, for a girl”. We were approached to write the song for the LFL, so there are parallels that can be drawn between being a woman in the music industry, or a woman on the football field, as well as a woman in every day modern life. We recorded ‘What It Takes’ with producer Clay Davies and it was mixed by Jay Van Poederooyen, who has mixed bands like Airbourne, Nickelback, Hinder, Skillet and Daughtry.

It’s the new theme song for the American Women’s Football League! Congratulations. How did that come about?
We played a show in Hollywood and NFL quarterback Bob Hewko was in the crowd, afterwards we became friends and he invited us to play a private birthday show for NY Yankees perfect-game-pitcher David Wells at Agua Caliente Casino Palm Springs. We performed for David and became friends, bonding over our love of Bon Scott & AC/DC. Present at the party was Legends Football League CEO and founder, Mitch Mortazza. We hit it off and became good friends, and what started out as a concept to play the anthem at an LFL game (an honor), became performing our music at the Playoffs half-time show at Toyota Arena Ontario as well as writing and recording ‘What It Takes’ for the league.

What was your experience like performing it at the LFL playoffs earlier this year?
Exhilarating! Performing songs that were written on the side of bed in Sydney Australia, to a crowd of that magnitude (11,000) at Toyota Arena in California in the USA, really shows you the power of rock and roll and what you can accomplish if you set your mind to something and are willing to get your hands dirty and work hard. The LFL, Arena and players all made us feel so welcomed and it was really inspiring to be backstage and watching all the teams get psyched up to play and then getting to watch the game from down on the field. They really play hard – It was awesome!

@thehotsofficial after playing @toyota.arena for the @mylfl Playoffs Halftime Show, after the night had finished in California USA

You are also working on new music. Can we expect an EP or more singles? Both?
Yes! We are currently back in the recording studio with Clay Davies and Jay Van Poederooyen working on our next record. You can expect both in 2020; more new singles, an EP and more videos! We had such a positive reaction and global response to the Self-Titled EP, we’re very excited to release new material. The new songs are killer and I’m having a blast recording them. I’ve got an arsenal of Gibson Les Pauls, Clay Davies has one of the best sounding vintage Marshall JMP amplifiers I’ve ever played through and Solo Dallas hooked me up with a Schaffer-Replica Tower, so you can definitely expect a massive guitar sound!

Do you have a set songwriting structure?
Not really, it all depends on the song. Sometimes we’ll start with a concept that in one sitting is fleshed out into a whole song, sometimes it will start with a chord progression, then the melody and lyrics are fit to suit and then riffs are added to flesh the song out, or sometimes it starts with a whole song of just lyrics and we’ll construct the music around it like a skeleton. One of the new songs on the record we wrote and recorded the music to, then whilst stuck in LA gridlock traffic, listening to the music on a loop over the course of the day the melody and lyrics were written. At the end of the day we’re writing rock and roll songs, not reinventing the wheel… More like putting new rims on the wheel, keeping air in the tires and making sure a really cool model of car doesn’t go out of production.

Are you going to be able to perform your new music live?
Yes, we are currently incorporating the new songs into our live set and getting ready to open for iconic Kiss guitarist Ace Frehley in California at the end of November! Then we are supporting Australian rock legends Rose Tattoo on their 2020 US tour, their first US tour in 38 years!

What is your biggest goal career-wise?
The Hots long term goal is to build the band into a writing, recording, touring and performing juggernaut, so we can rock and roll for as long and effectively as possible. My biggest dream however is to bring rock and roll and hard rock back in the public eye without compromising our integrity or contribution to the genre’s legacy. I’m grateful for people like Mitch Mortazza, Bob Hewko and the LFL who not only gave us an opportunity to get our music out there like they did, but also respect our vision and support it. I’m grateful for all the fans and people who have been following us so far, supporting The Hots and want to rock and roll. To me it makes perfect sense, you go to any sporting event and they’ll be blasting rock and roll, it gets the crowd pumped up! Rock and roll is a part of American, Australian and global culture, and we’re not letting it go without a fight.