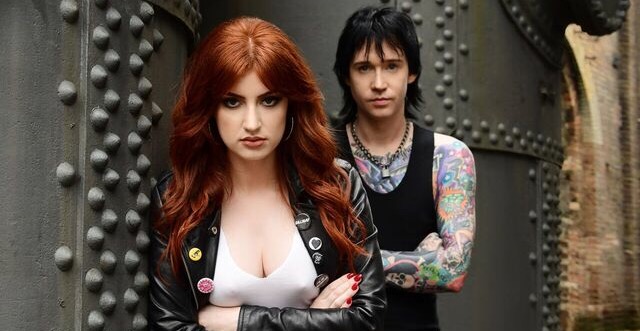 Let us formally introduce you to The Hots, they are an incredible married couple from Australia who so totally and completely ROCK! Get ready to fall in love!

First things first, we have to hear how you two met and fell in love!

Ronnie and I met many years ago on the Sydney rock scene and although we always showed interest in each other, life pulled us both in different directions. I fondly remember that Ronnie was one of the only people back then who took me seriously. Not only as a musician, but also as a human being. It wasn’t until years later when I was out in LA working on my own music, that our paths crossed again. We reconnected and not only found out that we were on the same page musically and could write killer songs together, but we also fell in love in the process. Ronnie proposed to me at a Suzi Quatro concert at the Sydney Opera House on Valentine’s Day and we’ve been inseparable ever since!

For our first act as Mr & Mrs Simmons we performed a song we wrote together that not only signifies our love but also gave a taste of what’s to come. ❤ here’s to us @ronniesimmons – we did it.

How did you choose your name The Hots?

It comes from having ‘the hots’ for each other!

What is the story behind the song “Before You”?

”Before You” is an honest account of how we feel about each other and our relationship. Some people see life as a game, others see life as a war, and after what we have collectively experienced in all aspects of our life, we can definitely relate to the latter. We’ve fought very hard for our relationship socially, emotionally and professionally… bang, bang, bang. We get to have it all.

What can we expect from your upcoming EP?

Strong and raw female fronted hard rock. No tricks, no backing tracks and no ballads. We set out to make the music we wanted to hear and most importantly, love making. We understand that in today’s current industry climate, rock is the underdog and openly making ‘hard rock’ music is a risk, one that we are unashamedly willing to take.

Any chance to tour or perform these songs live?

Of course, these songs were made to be played live. That’s why Mark Opitz insisted on not using a click track and us and our band recording them all live in the same room together at once – just like he did with AC/DC on Powerage. You can expect an EP launch show in LA very soon and we plan on hitting the road next year. To be the first to find out go to www.thehotsofficial.com, subscribe and we’ll keep you posted.

How do you feel being from Australia shaped you as artists?

We were both raised with an Australian working-class attitude and spent our younger years surrounded by rock music in the pubs of Australia. We are very proud of our Australian heritage and that’s why being able to work with Mark Opitz, who produced all the Australian bands we adore and grew up listening to, (AC/DC, The Divinyls, INXS, Rose Tattoo, The Angels (Angel City), Cold Chisel…), was a dream come true. Then, to hear in turn Mark Opitz say “Foxie Kelly reminds me so much of a young Chrissy Amphlett, she can sing like Chrissy and even thinks like Chrissy” and Mark McEntee of The Divinyls say “Great vocals and the guitar sounds kickin’!” Especially, when we look up to Chrissy and The Divinyls as much as we do is amazing. To have our music and vision respected by our heroes makes the hard work and sacrifice worth it.

Ronnie, you have toured with some iconic megastars (Motley Crue, Alice Cooper, Richie Ramone and more) What did that experience teach you about your own music?

Legacy is everything. You only get one shot at life and then you’re gone, forever. If I’m going to make my own music, I want it to be something I’m proud to be remembered by. I’ve put everything into The Hots, it’s honest, it’s real and it’s the music I wholeheartedly want to be making. I hope that The Hots can feel the magnitude of a crowd that I’ve felt from Arena stages like Madison Square Garden opening for Motley Crue and Alice Cooper, or experience the same intensity and devotion like from The Ramones fans at the sold out shows of South America with Richie Ramone. I’m very grateful for the advice and guidance that Richie Ramone and Nikki Sixx gave me.

Lastly, any relationship/marriage advice you wish to give to us?

What we’ve learned, is the importance of being on the same page as each other when it comes to fundamental values and mutually wanting the same things out of life. We see eye to eye on just about everything and recognize that we are stronger together as a partnership than on our own, in all aspects of our life. Our best advice is to be upfront and honest about what you expect from each other and if it’s not working, don’t force it! Don’t waste time settling for someone who doesn’t understand you, as you might miss out on meeting someone who does.