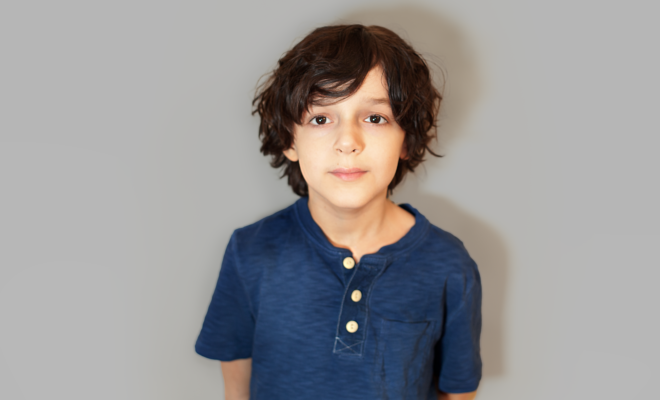 Actor Nolan River will be in two of the biggest movies of 2021 and already has been in one of the biggest tv series of all time. Not too shabby for someone who is only NINE-YEARS-OLD! We got to chat with the little powerhouse on it all.

Stage Right Secrets: I think everyone in America saw your face this month in the Super Bowl ad for your upcoming movie Old. What was that like for you?
Nolan River:It was pretty cool. My grandparents called everyone they knew and told them to watch it.

What was your experience like filming Old?
It was nice to take a break from my virtual school at home and go to the Dominican Republic with my dad. It was fun filming at a beach because it was pretty hot. In between takes, we would put our feet in the ocean to cool down. M Night is super nice and so were the other actors.

You also have another movie, Adverse out. What was it like working with your dad, actor Thomas Nicholas (Kevin Myers in American Pie)?
It was nice that I got to work with my dad, but it was weird pretending that I didn’t know him. I didn’t know the actor playing my dad in the movie at all, so it was kind of opposite.

The show New Girl is so popular and you got to play Jess and Nick’s son. Do you have a favorite memory from the set?
One of my favorite memories was jumping off a ladder onto a stunt pad. It was the last thing we shot, but it was for my entrance of jumping on the couch.

Do you have a dream role?
I would love to play a role where my character gets to go inside any TV show, movie, or video game and interact in their world.

How have you been balancing school and acting?
Since I’ve been doing online school, it’s been pretty easy to have extra time.

What’s been your favorite tv show to watch during quarantine?
I do like ‘Ninjago’ and I have seen every episode. I enjoy watching ‘The Magic School Bus’ and ‘Wild Kratts’ with my little sister since she can’t watch ‘Ninjago’ with me yet.