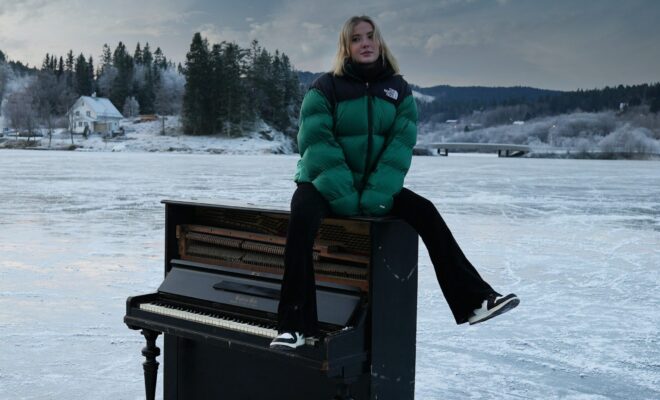 Norwegian-born Elise Eriksen has a brand new single out that will certainly make you “smile”. Daughter of one half of producer Stargate, who has worked with megastars Rihanna, Katy Perry, Beyoncé, and Coldplay, Eriksen grew up in studios, surrounded by pop music. Now taking her own crack at music, we got to chat with Eriksen on what’s next.

Stage Right Scerets: What can you tell us about your new single, “Smile”?
Elise Eriksen:I would say “Smile” is a very personal song because it speaks about the experience of having to put on a brave face for the world, even if you have things going on, and not letting others see that you’re upset about something. I think that “Smile” is special because it’s so raw and real. I hope that’s what people can take from it.

What are a few things that make you smile?
Definitely, my dog would be number one. My dog, my piano, you know… Being able to sing and perform makes me smile. Being around people and helping people makes me smile. Just the general presence of other people and having a good time, I would say is one of the things I cherish the most.

Can we expect an EP on the horizon?
Yes! (laughs) It’s very exciting. You can definitely expect one in the next couple of months. So that’ll be really exciting. I think I can share that there’s gonna be some exciting features. And more songs that are just honest and real. I’ll be playing with different genres and stuff, too.

What do you hope listeners take away from your music?
I mean, I hope people step away from it feeling heard and knowing that other people are going through the same experiences as them. I think that from “Smile,” you can take little pieces of it that you relate to. I just hope that people know that, you know, they’re not alone, and that a lot of people are going through similar things, especially at this time.

Who would be some of your dream collaborators?
Stevie Nicks. Definitely Stevie Nicks. She is the coolest woman alive. Travis Scott would be another one, considering he’s just a completely different genre and I’ve always just been a massive fan. So, I would say those two, although they’re opposites, I’m a massive fan of them both.

What are some albums that really shaped you as an artist?
Hmm. I would say Rumors and Tusk by Fleetwood Mac are two that really resonated with me and I connected with. Coldplay’s album, A Head Full of Dreams, too. That one really is an important one for me, and…. let me see… Adele’s 19. That one’s great. Another one that I love would be Astroworld, for sure, by Travis Scott. I don’t know if I would say that one has shaped my own music so much, but it’s definitely one that I really love.

Once things go back to normal, do you have a dream venue to play?
I mean, I think that me, and maybe everyone else in the world’s, dream venue would be Madison Square Garden. I mean, that’s the ultimate goal. That’s the dream.

What have you been listening to, reading, and watching during quarantine?
I have been listening to a lot of old music. A lot of, you know, The Rolling Stones, Elton John, Fleetwood Mac as I’ve mentioned. Also been trying to find a lot of new artists, which has been really exciting. In all genres – rap and indie and R&B. As for watching, it’s been mostly just crappy reality TV, if I’m gonna be completely honest. One series that I really loved is Normal People, which is a European series, which I really, really loved. I don’t know if I should say this, but I really don’t read too much. I probably shouldn’t, but… (laughs)

Related ItemsElise Eriksen
Giselle
← Previous Story EXCLUSIVE: Nolan River on his Super Bowl Ad and New Girl
Next Story → The Story Behind: ‘Down To One’ By Luke Bryan