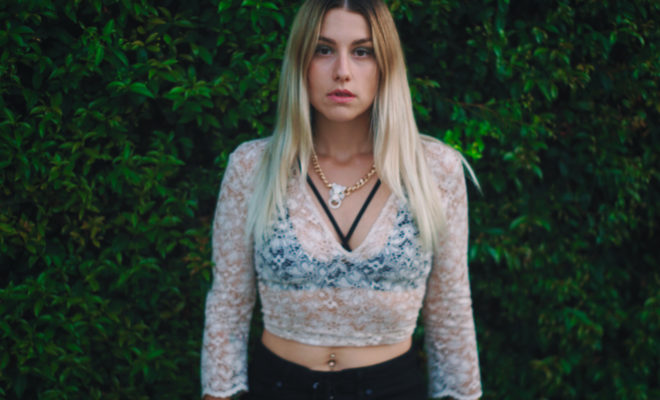 She’s written songs for BTS, Justin Bieber, Britney Spears and more! One of her latest, “Setting Fires” by The Chainsmokers ft. XYLØ was just RIAA Gold certified this week! Now, Melanie Fontana is writing her own story.

Do you have a typical structure to writing songs?

I LOVE writing a song title first. Titles inspire moods, moods inspire melody. I sometimes come into a writing session with a keyword and a melody I’ve come up with while I was in the shower or even cooking! I write little bits of songs while I’m doing “life stuff”. The voice note app on my iPhone is a lifesaver for me.

What are some songs you wish you wrote?

“God Is A Woman” by Ariana Grande. Holy crap, that concept is wildly clever and the melodies are unforgettable – a songwriter’s dream. Of course, “All About That Bass” by Meghan Trainor is another. I used to write with Meghan a lot and always knew she was genius, but man I wish she’d called me in for that one!

Is there any advice you would give to young songwriters? Say ‘yes’ to everything. Anything that you’ve got time to do, just go do it. Write in all the writing sessions. Sleep a bit less and work a bit more. Don’t stop until you know in your heart that you’ve earned a break.

Congratulations on the success of BTS’ “Euphoria”. What’s the story behind the song?

I was brought in to co-write the song with a wonderful producer named Candance Sosa and the equally awesome DJ Swivel. We initially penned it in English, hoping for The Chainsmokers to take it, but BTS snapped it up, sprinkled their magic in the mix and vois-là: “Euphoria”!

You’re credited with reviving Aaron Carter’s career, co-writing every track on his Løvë album. What was that experience like?

I grew up listening to Aaron and his brother Nick with BSB. As soon as Aaron briefed me on his vision, I threw my preconceived notions away. It took one session to “get it.” Aaron is a natural at creating a radio ready sound and above all, he’s determined! I had no idea how many late nights and tears we’d share together over the creation of “Løvë”. He really inspired the co-producer of the album, Lindgren, by starting every track himself. The moment “Sooner Or Later” took off on SiriusXM and the Spotify Viral Chart, we knew we’d made something REALLY special with Aaron, who’s fought for so long to show the world how truly unique yet listener-friendly his music can be.

Tell us about why the Music Modernization Act is so important.

The MMA is crucial for songwriters getting fairly paid! Pharrell Williams famously made a mere $2,700 in royalties from 40,000,000 plays on Pandora. 40 MILLION. That’s a lot of streams. The pay scale is clearly SO off. Reason being: these laws governing how songwriting royalties are doled out are over 100 years old and desperately need… well… MODERNIZING! Luckily, the senate just passed the MMA this week. Woohoo!

Any possibility that you will release an EP or singles of your own?

I’m in a constant fight with the question: “Am I a solo artist or am I not??” But the truth is, deep down, releasing my own music: that’s my endgame.

How did working on Nick Jr’s Shimmer and Shine come about?

One of my closest friends, a pop writer by the name of Joleen Belle, was connected in the world of writing for Nickelodeon and Disney. She graciously asked me to come work on Shimmer And Shine with herself and her partner Joachim Svare. I eventually ended up writing all the music with them. The coolest part about writing and singing these songs is hearing my singing voice in all the toys!

The genie asked me “What’s your wish?” & I said “To be the voice in a talking toy!” And she said #boomzaramay! #shimmerandshine #dreamcometrue #lifegoals #careergoals #oopsies #lols #nickjr #hollyweird #meow @joballer21 : queen collaborater!

Lastly, what are your favorite songs right now?

I’m pretty in love with Louis The Child and their song “Better Not”. They’re on my ‘people I must work with’ list!