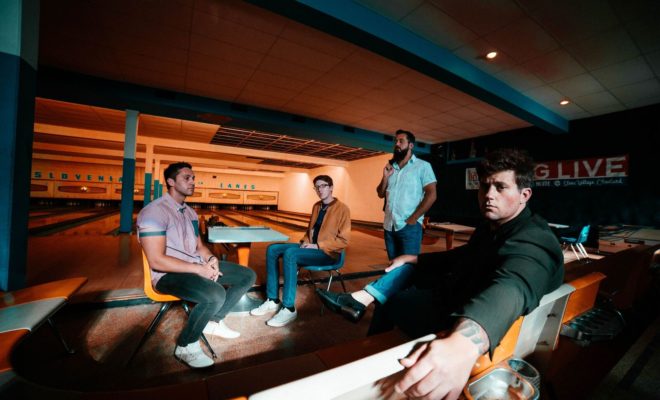 What is the story behind the song “Friends”?

‘Friends’ is about meeting someone and knowing right away that the two of your are just not compatible; but that doesn’t necessarily stop you from seeing it through.  Some of my best friends are extremely different people from me do you never know what could happen if you give someone a chance to be in your life.

We got major 80s vibes from “Friends”. Which artists have influenced your sound?

As a band, we have an extremely wide range of influences, from The Beatles to Rush to The Killers and everything in between.  This song in particular reflects our liking of bands like The Cure, New Order, and The Cars.  Our guitarist Tim Czajka is particularly good at layering the 80’s guitar vibes on our songs.

“Friends” is the final of six singles you released this year. What was your process of choosing what song for what time?

We definitely wanted to save one of our strongest songs for last, and the band felt that this song and No More Love Songs were our two best tracks.  So we spread out the release dates of those two and we decided to save Friends for the very end.

What have you learned from releasing singles instead of an EP?

I would say the best thing about it is that it’s much easier to get people to check out 1 song.  You do not lose anyone’s attention as quickly.  If you put out an EP or even an LP, and the first song a person hears doesn’t grab them, they might not listen to the rest.  But it seems like just releasing 1 track at a time gives your music a better chance of being given a chance.  One day we hope to release an LP and know that we have a fan base who will give the entire album a listen.

How has fan response been to the new releases?

The response has been very positive so far.  We’ve had a few pleasant surprises to.  Our song “Undercover” almost didn’t make the cut for the recording session, and it has turned out to be our most successful release so far.  It’s fun to see how people respond to different songs.  We feel like these tracks still have a long way to go.

What do you hope listeners feel when they listen to your music?

Each song will probably bring out a different emotion in people, we just want them to like what they’re hearing.  Some people really feel a strong connection to lyrics, while others (like myself) just love a good melody.  We are just hopeful that one of those connections is being made.

You spent a year writing and recording for these singles. Do you have a typical process for songwriting?

Yes it’s actually a pretty simple process.  One member will come in with an idea, sometimes a guitar riff or vocal melody, and the rest of us just build around it until we have a song.  Most of the time we work on the writing part together one the original idea is introduced.  We are constantly writing new material so I’d say we run like a well-oiled machine at this point.

How do you feel being from Cleveland shaped you as musicians?

Cleveland as a whole is certainly a town with an underdog mentality.  People who have never been here do not realize how nice it is so it sometimes gets a bad name.  I recently had friends visit from Texas for the 1st time and were blown away by the Lake Erie views.  To an extent we have that same mentality.  There is definitely much more going on in cities like Los Angeles and NYC, but the music scene here is also really cool and we’re proud to be a part of it.

Is there an opportunity to tour and or perform these new songs live?

Yes!  We actually have several regional shows booked this Fall.  Cleveland, Pittsburgh, Buffalo and Youngstown will all be receiving visits from us and we are still booking dates as we speak.

In the future, how do you plan on releasing new music?

It’s hard to say what the future holds, we’re currently going to ride these singles out and see where they go.  We’re hopeful we get an opportunity to record an LP at some point.
Related Itemsottawa
Giselle
← Previous Story Rock & Roll Hall Of Fame Announces 2019 Nominees
Next Story → Everything You Need To Know About Jingle Ball Tour!