Country crooner Cole Bradley tells us all about his latest single, “Since College,” co-written with Meagan Allen, and produced by Noah Gordon.

Congrats on your new single! How did Meagan and Noah come into the picture?
I was lucky enough to meet Meagan in a songwriting class at Belmont University in May of 2020 over Zoom. It was a lyric writing class taught by the legendary Pat Alger where we only wrote lyrics (without melodies and music). I learned a lot from Pat but it was awesome because we got to hear other student’s read their lyrics in class. Every time Meagan read her work, I was amazed. She is such an out-of-the-box thinker and so incredibly creative that I HAD to reach out to her for a write. Shortly after the class finished, we wrote our first song and we’ve been writing together every week since! I am so glad she was the first cut on this new project – she’s going to do big things in this town!

At the beginning of 2020, I signed my first distribution deal with an indie label in Nashville called Average Joes Entertainment. They put me in touch with Noah Gordon as they’ve used his production on several of their projects. I am super grateful that they did because Noah was brilliant through this entire process and he really cares about the music. He wanted to make sure we had the right songs before we went into the studio and I appreciate his patience and belief in me through this process. Noah did an unbelievable job elevating this song musically. He’s a beast!

What was the initial idea behind the song?
As a songwriter, I’ve always been a fan of trying to twist an ordinary phrase in a cool or unique way. I was visiting home in Canada a while back when I was in the backyard with some buddies shotgunning a few beers. I asked my dad if he wanted to join in on the fun when he laughed and said, “I haven’t done that since college”. Anyway, I put that phrase in my note section on my phone, and when I wrote with Meagan the next week, I told her how I have this idea but I think we can put a more romantic twist on it. The story is super relatable to my life so it felt like this was a great song to put out first with this new team behind me. 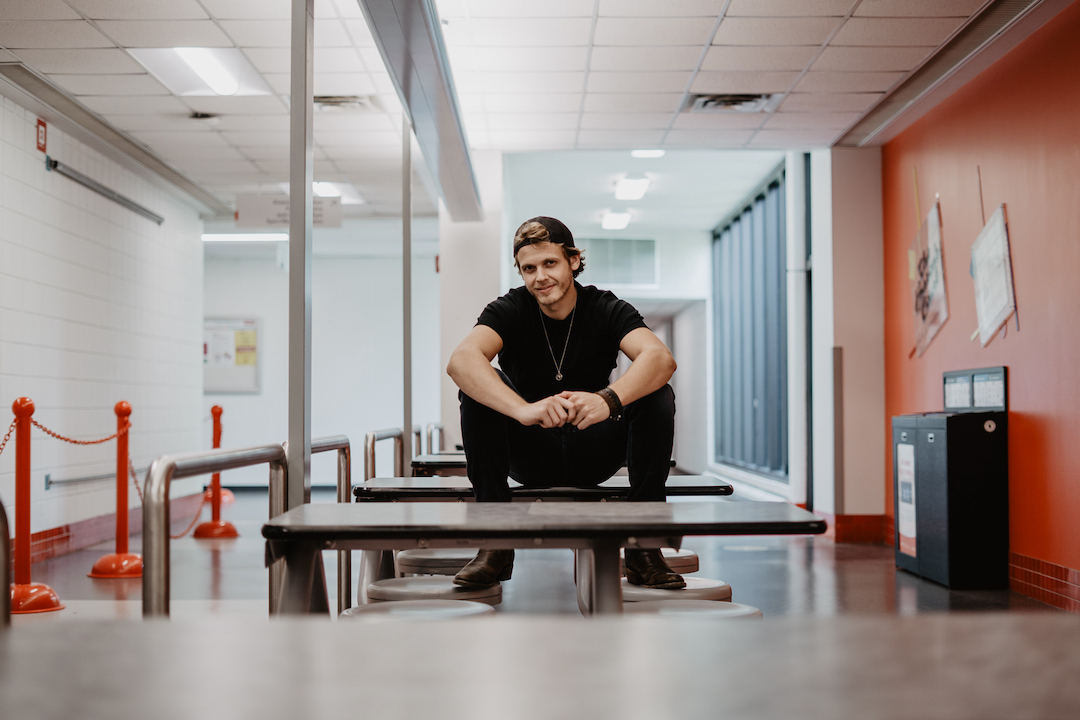 What was the first lyric created?
“It’s been a while since I pulled off an all-nighter with a faded blue highlighter and a textbook on my desk” – I love that blue highlighter lyric, that’s all Meagan. Such a clever, unique way of saying something. I doubt there are many other country songs with the word “highlighter” in there. 😉

How did you know that the song was complete?
It took us a few times to fix some little “knit picky” stuff. But the most important duty in the creation of this track was to make sure that the lyric was as conversational as possible. It is an incredibly honest song and we wanted to make it as relatable as possible to anyone who has had that special someone from their past that makes them think about what could have been. I feel like we succeeded and told an honest story.

What was your college experience like?
College was great. I feel like I got a little taste of everything that comes with college – dorm life, the parties, the stress of pulling an “all-nighter” to study for a test, and maybe
even feeling a little homesick at times. I am so lucky that I was able to go to college because I felt like it forced me to grow up and helped guide me to the man I want to be both in work and in life.

Were you involved in the music video’s creation?
I always feel like the artist should have some say in the video’s creation but never too much. I am SO lucky to work with an extremely talented videographer named Oliver Banyard who is a creative genius and did a wonderful job shooting this video. Oliver wrote the storyline in a very cool way that captured the central message of the story I was trying to tell. I could not be more grateful for his friendship, talent, and hard work in this video. I am super proud of what we accomplished.

Related ItemsCole BradleyMeagan AllenNoah Gordon
Giselle
← Previous Story Bottlerock 2021: The Napa-Based Festival is Back!
Next Story → The 300-Word Album Review: BASTILLE’s “Give Me The Future”