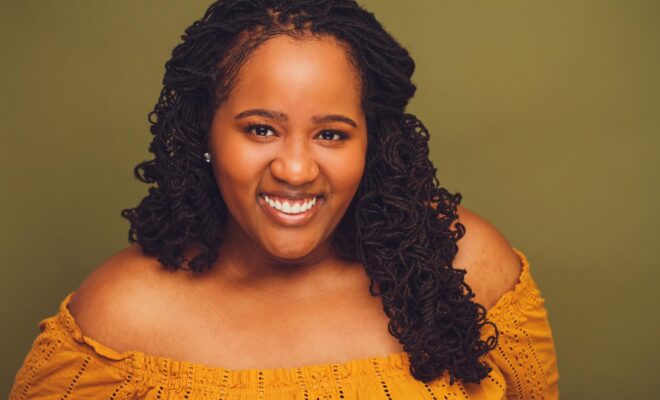 Aneesa Folds is one of the members of the acclaimed hip-hop improv troupe Freestyle Love Supreme.

The group has been around since 2004. They have performed Off-Broadway, on Broadway, the Edinburgh Festival Fringe, and have their own Hulu documentary. Oh yea, and it was all started by Lin-Manuel Miranda. The show is now returning to Broadway in the fall and has its own academy where members like Aneesa, teach people of all ages how to rap and perform improv. We chatted with Folds about everything.

Stage Right Secrets | Congratulations on the return to Broadway! What are you most looking forward to?
Aneesa Folds | HUMANS! Connecting with humans is what our show is about. It’s about spreading love, building community, and sharing joy with people. After being away for so long I think we all could use that joy and connection again. I know I can.

What are going to be your dressing room essentials this time around?
A LOT more hand sanitizer than I had in there the first go around. And I already had quite a bit.

How would you explain the show to someone who has never heard of it before?
I always tell people it’s like Wild N’ Out meets Whose Line Is It Anyway. A bunch of friends acting a fool on stage and doing what they do best! A musical Hip Hop improv extravaganza if you will!

What is the Freestyle Love Supreme Academy like?
It’s family. A safe space for people from all walks of life and levels that find joy in saying words over a beat.

Do you have a favorite class to teach?
I just love watching people grow and come out of their shells. Freestyling is a scary intimidating thing so it’s always fun to watch the moment people finally get out of their heads and let loose. On the other hand, working with kids is super exciting because they’re not at the age of judging themselves yet so they just jump in. It’s a great reminder, I wish we could all go back to being that free.

Say for someone like me, who has no background in improv or hip hop, where would you
start with me?
In FLS Academy we do this thing called gibberish rap. It’s basically listening to the beat and seeing how the music inspires what comes out of your mouth. There are no rules and no wrong sounds. It’s a great place to start because anything goes!

What do you think the future of theatre looks like?
There will be more out-of-the-box shows like Freestyle Love Supreme on stage. More people of color are on stage, in power, and behind the scenes. More people of color in the audience because theatre is accessible to EVERYONE. A safe place with New and important stories being told.

What did you listen to, watch and read during the pandemic?
Books/Plays: Sugar In Our Wounds, The Kite Runner, Little Fires Everywhere
Podcasts: Okay, Now Listen, Why Won’t You Date Me, Questlove Supreme, Something Was Wrong, InterTWINed
TV/Movies: Lovecraft Country, WandaVision, Judas and The Black Messiah, Lupin

But tickets to FSL on Broadway HERE and sign up for the FLS Adacemy HERE.