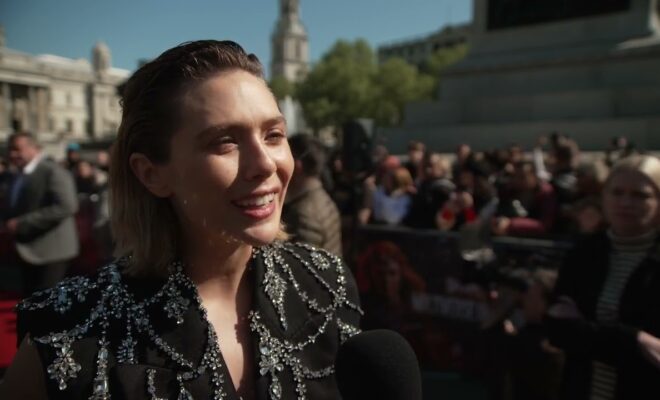 Elizabeth Olsen is ready for fans to see Wanda Maximoff in a new light in Doctor Strange in the Multiverse of Madness.

The cast of the upcoming Marvel film attended a photocall at Trafalgar Square on April 26, 2022, in London, England. The second Doctor Strange movie was filmed nearby.

“We got to film in Richmond and it was a joy to live here and again,” Elizabeth Olsen said. “To film another marvel film in the U.K. is the best part of my job. I’m very excited to bring it here to London and to be in this beautiful city.”

The new MCU film will be taking storylines from WandaVision, Loki, What If…?, and Spider-Man: No Way Home.

“I think The Multiverse is really this amazing opportunity for storytelling for us to explore what what lives could have, had people made different choices. I think it’s kind of a nice thing for an audience to sit back and either be grateful for where they are now or kind of want to wonder about a potential parallel universe.”

“It’s really fun for endless storytelling for these characters and I think it’s opening up quite a world for all the characters in MCU,” Elizabeth Olsen added of the second Doctor Strange film. “I hope, I think there’s a lot of all the things that that the fans love. There’s humor, there’s action, there’s a soul, there’s spirit.”

As for what’s next in the Marvel Cinematic Universe, Thor: Love and Thunder debuts on July 8, 2022. Elizabeth Olsen believes that Doctor Strange will help tell a larger overall story.

“I think it does set up the world of the MCU in a new and exciting way,” she concluded.

Co-star Benedict Wong, who portrays Wong in the Marvel franchise, echoed her sentiments. Over the course of the last few movies, he has seen the MCU grow even larger. This also means, more special effects and new technology being used on set.

“I just think about the advancement of these of the technology,” he said. “Now that we can really properly realize like Steve Ditko’s kind of strange kaleidoscopic multiversal world. So we’re in for a treat you know? Get to the cinema!”