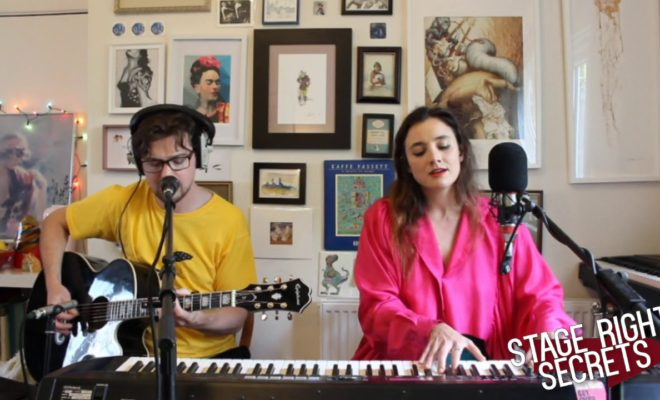 On Stage Right Secrets‘ Living Room Live Virtual Concert series, we have Ebony Buckle performing an acoustic set for us.

Congrats on “Ghost”! Creating the song was certainly unusual, walk us through the creative process behind the song and video.

Thank you so much! Yes it was unusual in that we wrote it over skype. Nick and I got married and then my marriage visa was refused. I had to go back to Australia and it took nearly two years to get back. So we were stuck in limbo and it was a really hard time. Ghost was the first thing I had been able to create in a long time and it was the start of the Ebony Buckle music journey! I think it’s become pretty normal to write songs over zoom now that we have all been in lockdown!
The music video is absolutely stunning, what role do visuals play in your music?
Again…thank you so much! My beautiful brother Finn Buckle filmed it. Visuals are important to me I think because they help to tell the story of my music. I have so many music video ideas and plans! For this one, we wanted to recreate the feeling of being stuck in limbo, where everything repeats and you can only daydream about the future.
You’re taking part in a Pride live stream, how do you think we can all become better allies and inclusive?
I’m really tired of living in a world where people are not accepted for being themselves. The LGBTQ+ community are some of the bravest people I know because they are fighting for their right to exist. I think we need to keep listening to and sharing the stories from this community and also stand with them when their rights are challenged. I know I can definitely do more, but I guess we keep trying and learning and growing and eventually maybe people can just be exactly who they are. What a world that would be.
Most of the world was or is in quarantine, what did you do to pass the time?
We have been so busy recording our first album! You can join the journey by signing up to my Patreon page…www.patreon.com/ebonybuckle
We have also been doing some live shows from our lounge. And I have taken up gardening which has been really exciting and very boring for my friends because I won’t stop going on about it!
Was it harder or easier to be creative?
It was easier to be productive because all of my other work stopped. Creatively though, it has been up and down. Some days it was really hard and I was completely uninspired and overwhelmed by everything going on in the world. And other days I was wearing my best suit and ready to create more music! I feel really grateful to have Nick because he is my writing partner and producer and we have our own studio at home. So in that sense, we have been able to do more than we normally would! It’s been important to try to keep a routine otherwise everything feels like it’s spiraling!
Have you discovered new artists or rediscovered any classic music lately?
Something that has really kept me going through this, was joining the group Girls to the Front, which was set up to help women in music during this time. We meet twice a week on zoom and we have workshops and presentations from people in the industry. It has really helped keep me motivated and also meet other women in the music industry! So I would definitely recommend some artists from the group including:
https://www.instagram.com/stories/nualasmusic
https://www.instagram.com/soundslikeberne/
https://www.instagram.com/jouliefox/
https://www.instagram.com/berg/
https://www.instagram.com/iamjessicawilde/
But I have also discovered some amazing classics I had never heard! The Whole of The Moon by The Waterboys is one, and Work of Art by Burning Hearts is another!
Taking it back, what was your local music scene like growing up and how has it changed?
I am from Townsville which is a city by the sea in Australia. I don’t think I was really part of the local music scene. I was very much involved in the Musical Theatre/Theatre scene however. Townsville has an amazing community of really talented artists, dancers, directors, singers, actors etc. They have some amateur theatre companies and also some professional companies and I did loads of shows with them growing up. I think because it is so far away from any of the larger cities in Australia, it had its own cultural centre. I guess you could say for a while I was a big fish in a small pond. And now I am a tiny fish in a huge ocean! London is massive and there are so many incredible artists. But there are also so many opportunities to play and to share our music.
What made you gravitate towards music?
I’ve always written songs and I think it is a way for me to express myself fully. I’ve studied classical music and musical theatre and I am also an actor. I think writing my own music feels like the truest version of me if that makes sense?
What else can fans expect from you this year?
We have some new music coming out later in the year, and we are also working on the album as I mentioned earlier. I’m so excited about it and if you join my Patreon (another shameless plug) you can hear some of the album tracks already!
Related ItemsEbony Buckle
Jacklyn