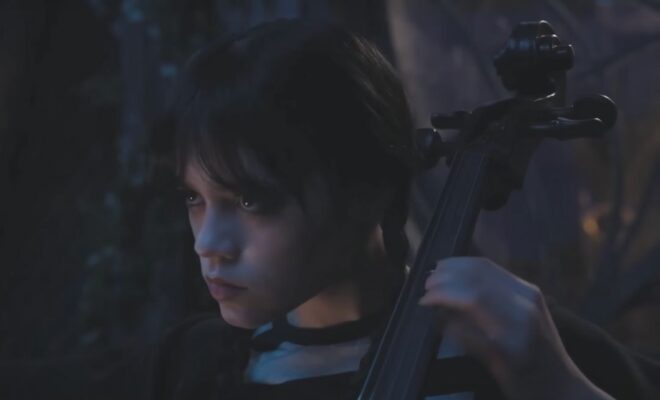 Does Jenna Ortega Play The Cello? Find Out About The Wednesday Performances

In the Netflix original series, the titular character is seen playing the cello on two occasions during the eight episodes. The first is in Episode 1 entitled “Wednesday’s Child Is Full of Woe.” After she was assigned her dorm, we found her playing the cello outside her room on her balcony.

The second time was in Episode 3 entitled “Friend or Woe.” She briefly played a short portion of a song at the town’s festival and statue unveiling before it gets set on fire.

Does Jenna Ortega Play the Cello?

Yes, Jenna Ortega learned to play the cello to perform it in Wednesday. She shared selfies of her practicing while filming in February of 2022 in addition to a video of her first-ever practice.

“I learned to play the cello for Wednesday,” she told WIRED. She ended up beginning to learn the cello roughly two months before they began shooting.

“I probably couldn’t play too well now,” she added. “Just because I’ve been away from home so much working and it is something that I want to continue to pursue.”

“I love music,” she continued. “I think there’s so much to be found in music and you learn a lot, not only about your own personal taste and how far you’re willing to extend yourself but then also about different cultures and what is celebrated in other places in the world. And I think that that’s a really beautiful thing.”

What song did Jenna Ortega play in ‘Wednesday’?

Wednesday (Jenna Ortega) performs not one but two songs on the cello during Season 1 of Wednesday. The first in Episode 1 was The Rolling Stones’ cover of “Paint It Black.” The song was written by members Mick Jagger and Keith Richards. The track was only featured on their US record, Aftermath in addition to later compilation records.

The second performance was the classical piece entitled “Winter” by Antonio Vivaldi. Her character is seen playing it despite the mayhem from the fire and destruction.

Despite not singing in Wednesday, Jenna Ortega does sing. During the same interview, she explained that she has auditioned for roles where she had to sing. Ortega clarified that she would be “happy” to do it again. However, she “would never want to make a career out of it.”

“I would love to be a musical composer. I’d love to put out neo-composing albums and things like that, very ambient noise,” she added.